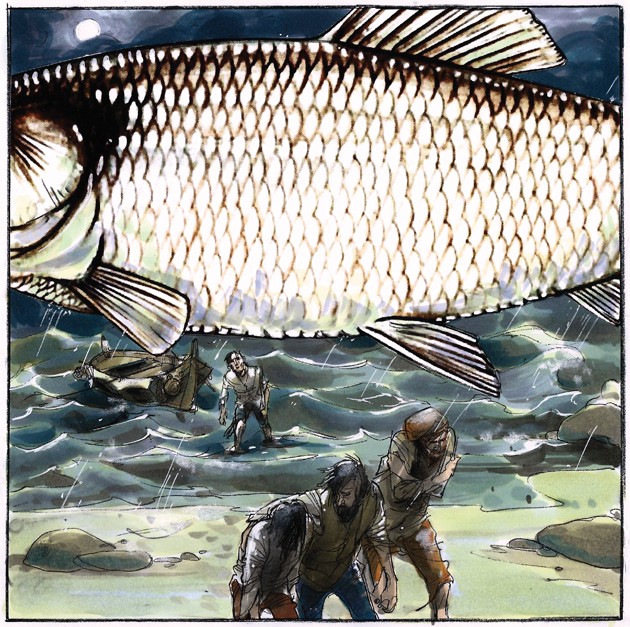 May 5, 2015
The Woodcutter and the Shining Fish

Once upon a time, a poor old woodcutter and his wife lived on the edge of the forest, beside the sea. One day, as the woodcutter was walking through the forest looking for wood to chop, he happened upon a stranger.

“Excuse me,” said the man with shining eyes and a long white beard, “I know all about you. I know you have many troubles. I’ve heard your sons have died, and you and your wife live all alone with no one to help you. I’ve come to offer you help.”

And he handed the woodcutter a leather bag.

“Thank you,” the puzzled woodcutter said, and then he looked into the bag and saw that it was filled with gold. He turned to thank the stranger, but he saw only a wisp of smoke where the man once had stood.

He hurried home to tell his wife the wonderful news, but as he was running, he thought, “If I tell my wife we are rich, she will waste the money on nonsense.”

So he decided to hide the leather bag beneath a pile of manure outside the house.

The next morning, the woodcutter woke to the smell of sausages cooking. He sighed with pleasure, but then his eyes opened wide. Where could his wife have found the money to buy such a luxury?

He hurried to the kitchen and asked, “How can we afford sausages?”

She smiled. “When you came home without wood yesterday, I decided to sell our manure to our neighbor. This way, we would not starve.”

The woodcutter ran outside. To his dismay he saw the pile of manure was gone — and with it the leather pouch. He nearly wept, but without saying another word to his wife, he walked slowly into the forest.

As he was walking, he again came upon the stranger with those shining eyes. The man smiled at him and said, “I know what happened, but it’s all right,” and he handed the woodcutter another leather purse filled with gold.

Once again, the woodcutter hurried home. This time he thought he would be wiser about a hiding place, and when he walked inside, he noticed a pile of ashes in the fireplace. He quickly hid the pouch beneath the ashes.

When his wife appeared, he said, “I’m sorry. I was tired today. I’ve collected no wood.”

The next morning, he woke once again to the smell of a delicious breakfast — sweet rolls and butter. He hurried to the kitchen.

“How did you pay for sweet rolls?” he asked, alarmed.

“Ah, I am industrious,” she said. “I sold our ashes to the farmer who needed them to fertilize his field.”

The woodcutter nearly shrieked and ran once again into the forest.

Sure enough, the stranger appeared. This time he shook his head. “I’m afraid your destiny is never to be wealthy,” he said. “Follow my advice and I promise that you will live happily ever after.”

He handed the woodcutter a leather bag. “Inside this bag there are two dozen frogs. Go sell them at the market. With the money you earn, buy the largest fish you can find. Make sure it is a nice, big fish!”

This time the woodcutter decided he must do exactly as the stranger instructed. Surely he possessed some wisdom. So he sold the frogs in the market, and with the money he bought the largest fish he could find. When he returned home, it was dark and windy. He hung the fish from the rafters and hurried inside to rest.

“I’ll clean the fish in the morning,” he thought.

A hard spring storm hit later that night. Giant waves crashed onshore, and the wind howled. The rain fell so hard that the woodcutter and his wife worried their house might crash down around them.

Suddenly, at midnight, they heard someone pounding on the door. The woodcutter walked to the door to see who it could be, and when he peered outside, he saw a group of fishermen, drenched and grinning from ear to ear.

When he opened the door, they cheered, “You saved our lives! Bless you forever!”

The woodcutter was confused. “What did I do?” he asked.

“We were caught by the storm at sea. We had no idea which way to sail, but we saw the light you placed in your doorway! Without you we would surely have drowned.”

They pointed at the fish hanging from the rafters, and the old man was stunned to see that it was shining as bright as any light he had ever seen — silver and glowing, as bright as a full moon.

After that night, the old man always hung his shining fish from the rafters to guide the fishermen to shore. They rewarded him every evening with their fresh fish.

And so the woodcutter and his wife were taken care of by the young fishermen, and they lived the rest of their days in comfort.