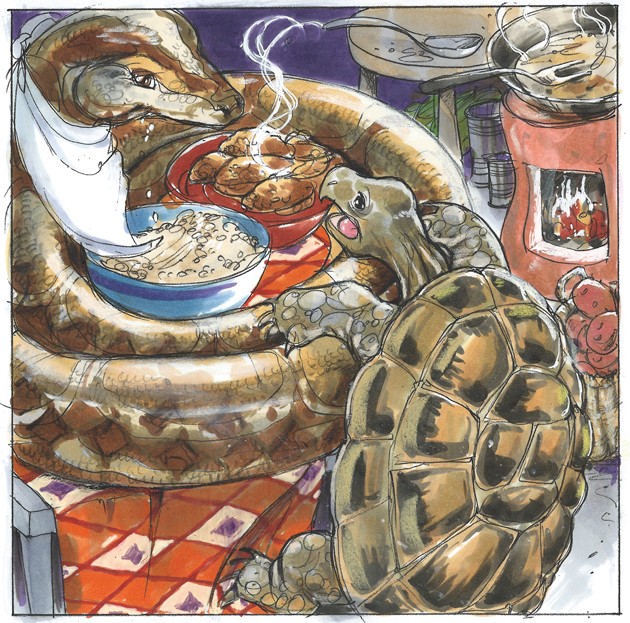 Once upon a time, Ijapa the tortoise was taking a long, lazy walk. When he started out from home, he had a great deal of energy, but after he had walked for a very long time, he began to move more slowly, and then more slowly still. By the time he reached a village, he was not only tired, he was starving.

Suddenly he remembered. This was the village where his old friend Ojola, the boa snake, lived. He and the boa snake knew each other well. Once upon a time they had been friends. “I’ll just stop and see my old friend,” Ijapa thought. “He’ll surely give me food to eat.”

When Ojola saw his old friend, he greeted him warmly. “Come in, come in, sit inside where it is cool,” he said. Naturally Ijapa was grateful for the invitation.

Once inside Ijapa smelled some familiar scents — catfish frying, and plantains, and was that Banga stew he smelled? He wriggled his nose with anticipation. Surely his friend would share a meal, and sure enough, a moment later, Ojola said, “Old friend, come, let us eat together.”

“I shall just go wash my feet in the stream outside,” Ijapa said. This he did, and when he returned, supper was in the center of the house. Now he could see the steaming bowl of fried rice, the platter of fried catfish. Ojola had coiled his body around the feast.

“I’d love to,” Ijapa said, “but why are you coiled around the plates? I can’t reach anything with you in the way.”

“Ah,” Ojola said, “this is the way of snakes. When we eat, we curl ourselves around our food.” He began to eat with great gusto, but Ijapa could not reach over his friend’s body. He tried. He tried again, but with that enormous coil in his way, he could not reach a thing to eat.

Within a few minutes, all the food was gone, and Ojola was bigger than ever.

“How good it is to eat with a friend,” Ojola sighed, his thick body beginning to uncoil.

Now Ijapa was even hungrier than he had been. He was also hurt and angry and confused. Why had his friend guarded the meal that way? What could this have meant? Was his friend playing with him? Was Ojola not truly a friend? Ijapa decided he must leave.

But just then he had an idea. “Ojola,” he said, “you were so kind to me. Why don’t you come to my house for a meal on the day of the yam harvest? There’ll be plenty to eat!”

And on the day of the yam harvest, Ijapa’s wife prepared eel stew and platters of plantains and yams, and while she cooked, Ijapa slipped out into the fields and wove a long, thick tail of grass. This he stuck to himself with gum from the gum tree.

Soon there was a knock on his door, and there stood Ojola. “Welcome!” Ijapa said warmly. “You have come such a long way, you must be hungry.”

“I am indeed,” said Ojola. “Let me go wash at the spring,” and off he went to wash. When he returned to the house, he saw that Ijapa was already eating, and he had coiled his long, thick grass tail around the plates and bowls and platters.

Ojola tried to reach for a yam, but he could not reach over that tail.

Ojola tried with all his might to reach over or under or around that tail, but he could not. After a while he was begging for food. “I’m starving, Ijapa,” he said. “And I wonder this. How is it that your tail used to be so short, but now it is so very long? And why is it your tail guards your food?”

“Ah,” Ijapa said. “That’s an interesting question, my friend. And the answer is simple. One person learns from another.”

Ojola understood. He nodded. He sighed. “I was not a good host,” he said.

“And I have learned from you,” Ijapa nodded.

And so it was. That year Ojola did not enjoy the yam festival, but he did learn a lesson.