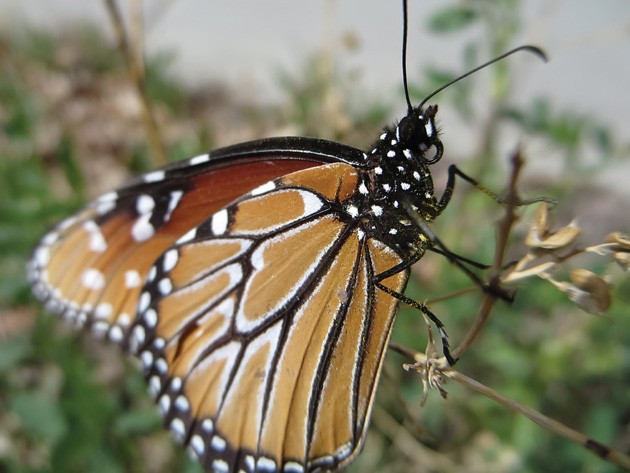 A monarch perches on the stem of a plant located in a residential garden in Tooele.

Mostly known for its fascinating migration, the monarch is one of the most recognized species of butterfly in North America, and is most familiarized for its wing colorations and patterns. With an approximate wingspan of 3 1/2 to 4 inches, the monarch’s orange-colored wings vary from bright to dull orange, with black tiger stripes and speckled white spots outlining the edges of its wings.

The monarch’s wings are a beautiful sight for humans to observe, but are however, intended as a warning for predators. Like the monarch, many insects use color as a defense mechanism with bright, noticeable colors to signal “poisonous” to predators, whether they really are or not. Monarchs though, are very foul tasting and are poisonous to eat. Although they are not deadly, they do cause creatures to become ill and sometimes induce vomiting. This reminds animals to avoid them from then on.

The poison in the monarch’s system is received from toxins ingested from milkweed, which is their provided host plant when they are a caterpillar. As caterpillars, monarchs feed on milkweed before undergoing metamorphosis, and the ingested toxins stored in their system remain there even once they become butterflies. As a butterfly, they sip the nectar from flowers.

Monarchs, admired for their extraordinary migration, begin in Mexico during the early spring and travel with tens of thousands of other monarchs over a 2,800-mile journey, settling in North America and Canada.

When the first monarchs leave Mexico, they soon begin mating as they travel. The first migrating butterflies do not make it all the way to North America and neither to the second, third, or fourth generations of their hatchlings. With the process of flying a varying distance, mating and laying eggs, the evolved offspring continue the migration. They continuously repeat this cycle up until they accomplish their journey. By the time monarch butterflies succeed in their migration, they will have had about five generations of monarchs. Towards the end of the summer, the remaining generations of monarchs then migrate from North America back to the starting point of Mexico, later to repeat the same migrating pattern the following spring.

As monarch butterflies group and migrate for their destination, ready males aerially pursue females and attempt forcing them to the ground in order to mate. Females often try avoiding this attempt of copulation, for it is estimated that only 30 percent of the male’s attempts result in mating. The male monarch’s reproduction strategy is used upon multiple females, and for those he successfully forces to the ground, copulation can last from 30 minutes to an hour.