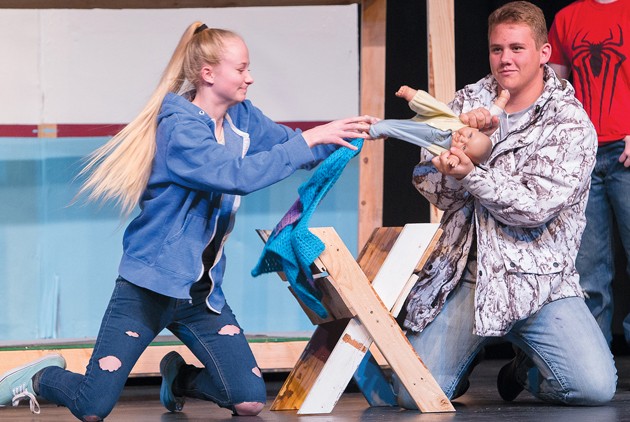 Imogene Herdman (Savannah Farr) and Ralph Herdman (Kevin Fife) fight over Baby Jesus as part of their roles as Mary and Joseph in Grantsville High School’s production of “The Best Christmas Pageant Ever.” The play opens Thursday and runs through Saturday. Showtime is 7:30 p.m. at the GHS auditorium, and tickets can be purchased at the door.

December 1, 2016
There’s plenty of Christmas events to enjoy this weekend

If your holiday gusto is already beginning to dim after Black Friday and Cyber Monday shopping, this weekend’s lineup of community events may be just what you and the family need to get back into the Christmas spirit.

From parades to plays, it all begins Friday and continues to Monday. Here is a wrap-up of what’s on the holiday calendar this weekend:

Starting Thursday for a three-night run, the Grantsville High School drama department will bring “The Best Christmas Pageant Ever” to the school’s auditorium stage. Co-directed by drama students Annie Schutz and Madi Firth, the play is based on the 1971 book written by Barbara Robinson.

The play is a hilarious story about six delinquent children called the Herdmans who go to church for the first time to steal free snacks. While there, they’re enlisted to participate in the church’s Christmas play. Chaos ensues, they terrorize the other actors, but by the end, the troublemakers show a change of heart “that’s funny and sweet,” said GHS drama teacher Jorden Cammack.

Performances are Thursday, Friday and Saturday nights and begin at 7:30 p.m. Tickets at the door cost $5 for adults and $3 for students and children. GHS is located at 155 E. Cherry Street in Grantsville.

The Life’s Worth Living Foundation will host the third-annual It’s a Wonderful Life Festival at Deseret Peak Complex on Friday and Saturday. Foundation president Jon Gossett said the festival, which has grown quickly in popularity, is not about suicide prevention, but is about having the “community come together.”

On both days the festival will feature 45 crafter and vendor booths, five food trucks, a kids craft station, a bake sale, Christmas karaoke and more, Gossett said. Also, photos with Santa will be there Saturday from noon to 4 p.m. Five-by-seven prints will be available at the festival for $10 for one and $15 for two.

Gossett said all proceeds collected from craft and vendor booth rentals and the bake sale will go to the foundation. All other cash donations at the door will go to the Tooele Food Bank.

He added the festival has gotten bigger every year, and even draws visitors from along the Wasatch Front. He stressed the foundation’s work of suicide prevention wouldn’t be possible without the support of 18 local businesses every year.

Deseret Peak is located at 2930 State Route 112 in Grantsville.

The Tooele County Chamber of Commerce and Tourism will hold its annual Santa Claus Parade this Saturday in Tooele City. It starts at 10 a.m. at the intersection of Utah Avenue and proceeds south on Main Street to Vine Street. The parade then turns right and proceeds west on Vine Street to 1100 West.

Next, the parade turns left and ends at Tooele Applied Technology College, which is located at 88 S. Tooele Boulevard. Children may visit Santa at TATC after the parade. Cookies and hot chocolate will be served.

Tickets are available at Tooele City Hall, 90 N. Main Street, or Tooele City Library at 128 W. Vine. To get a free ticket, bring a can of food.

The auditorium’s doors will open at 6 p.m. For more information, contact the Tooele City Arts Council at 435-843-2100 or Holly Tippetts with the city’s parks and recreation department at holly@tooelecity.org.

The Season of Magic talent show is also being presented by Tooele City and Tooele City Parks and Recreation. Tooele High School is located at 301 W. Vine Street.