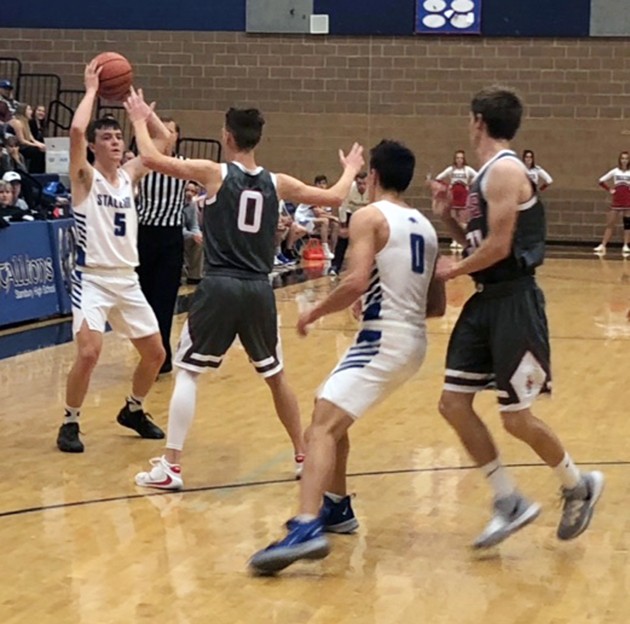 Stansbury senior Peyton Thevenot (5) looks to make a pass to teammate Jaden Jenkins as Delta’s Britton Smith (0 in grey) gets between them during the second quarter of Tuesday’s non-region game at Stansbury High School. Thevenot hit a 3-pointer with 13 seconds left to lift the Stallions to a 64-63 win over the Rabbits.

Stansbury guard Peyton Thevenot hit a 3-pointer with 13 seconds left to give the Stansbury boys basketball team a 64-63 win over Delta in the season opener.

“Coach called the play and just told me to hit it,” Thevenot said. “(Junior forward) Dave (Spaulding) set an amazing screen for me, I was open and I just hit it.”

The senior scored 23 points on five 3-pointers in the opener, 18 of which came in the second half.

“Smith is pretty phenomenal,” Stansbury head coach Joe White said. “He’s a good kid, too. He’s respectful. Our kids were out there thumping him and he was telling them good job. I think the world of him. He probably would have scored more if he hadn’t been in foul trouble early.”

White said he was pleased with the way junior guard Kru Huxford handled the impossible task of defending the Delta star all night. Smith missed a pull-up jumper as time expired that would have robbed the Stallions of Thevenot’s last-minute heroics.

“Ultimately we didn’t want (Smith) to touch the ball, but he’s a great player,” Thevenot said. “We just tried to put as much pressure on him with double teams, triple teams, isolations, whatever we could try.”

Smith was held scoreless for the final two minutes, and without a field goal during the final 3:36.

Stansbury senior forward Payton Gaillard had 17 points in the win, including a corner 3-pointer at the start of the fourth quarter that put the Stallions up by two and sparked an 8-0 run.

The Stallions led by as many as 10 points with 5:17 left to play before Delta held them scoreless for the next two and a half minutes to claw the deficit back down to four.

“We got exposed a little bit on our defensive stance, and our offensive abilities to withstand some pressure was not as good as I was expecting,” White said. “I thought we were a much better rebounding team than we showed tonight. I think that’s something we can clean up.”

Sophomore guard Landen Giles hit a 3-pointer from the corner to put Stansbury up 61-54 with 2:50 to go.

Now 1-0 on the season, Stansbury will next face Hillcrest, hoping to reverse last year’s 64-63 overtime loss to the Huskies in Midvale.

The matchup will be the second between the two teams since Stansbury assistant coach Sam Richins stepped down from the head coaching job at Hillcrest two years ago.

“I associate with those kids every day (as a teacher at Hillcrest),” Richins said. “I love them, I care about them, and I want them to win every game except for tomorrow night.”

The Huskies are 0-1 on the season after a 77-58 loss to Copper Hills on Tuesday. Hillcrest junior Trajen Iorg had a game-high 22 points in the attempt.

Tipoff is scheduled for 7 p.m. on Wednesday at Stansbury High School.