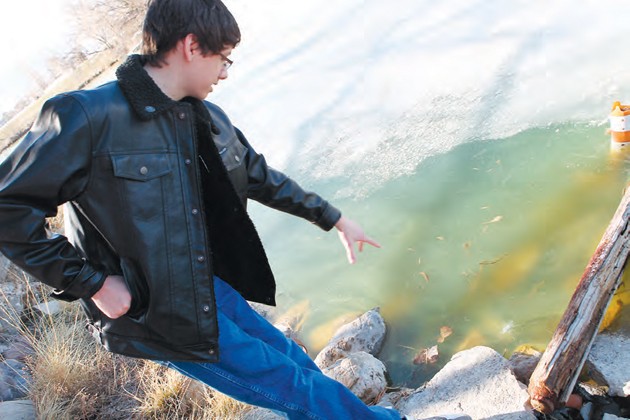 Stansbury resident Stan Crapo points to a dead carp stuck in the ice next to his home on the Stansbury Lake Tuesday morning. The extended time of the frozen lake led to dead fish appearing.

Residents who live along the shores of Stansbury Lake are concerned over dead carp that have floated to the lake’s surface.

Stansbury Park resident Shirley Crapo, who lives near the northeast end of the lake, said Monday morning she found about 10 dead carp floating around her dock. Nearby neighbors have mentioned to her that they have also pulled out several dead carp near their docks.

“Usually the lake is frozen from December to the beginning of February, but this year it’s still partially frozen,” she said. “Now it’s melting at the end of each finger and along the edge of the water line, and we’re all finding dead fish.”

Tom Becker, wildlife biologist for the Division of Wildlife Resources in Tooele County, said as of last week, he hadn’t received many calls regarding dead fish in the lake. But now that the ice is thawing due to warmer temperatures, more dead fish are coming to the surface.

“Now that the ice is coming off and winter is subsiding, things are starting to show up,” he said. Mike Slater, aquatics program manager for DWR’s Central Region, said because most lakes had more ice than usual due to a cold winter, dead fish are a problem he’s seeing around the state. “The longer the ice lasts or the thicker it gets, it ends up looking a little worse when it starts to thaw,” he said. “There’s only so much space underneath there. A lot of plants and vegetation growing during the summer, and all of that stuff dies over the winter.” Slater said when the vegetation dies, it decomposes and utilizes oxygen in the water. If there isn’t a water source going into the body of water, or in this case, the entire lake is covered in a thick sheet of ice, then the oxygen doesn’t get replenished. As a result, the fish die.

“Fish die when they can’t find a space where there’s enough oxygen for them to survive,” he said. Glenn Oscarson, vice president of the Stansbury Service Agency, said agency officials have noticed the dead fish and have determined a lack of oxygen as the cause. “It’s a winter kill because the lake stayed iced over all winter,” he said. “We are not finding any toxins in the lake. It’s just a result of early ice.”

Crapo said she’s concerned about the look and smell of the lake once the temperatures start to rise.

“I just don’t want a rotten fish soup going on in April,” she said. In addition, Crapo said she’s also concerned about the fish because she’s seen mainly carp floating in the lake.

“If it’s the carps floating to the top, then that’s a pretty good indicator that something is wrong,” she said. “That tells me the bass and blue gill are in worse shape because carp live way deep down.”

Slater said it’s true that carp are a little more hearty than other species of fish, and can be harder to kill, but when it comes to lack of oxygen in the water, no fish is safe from death.

Crapo said she called the Stansbury Park Service Agency Monday morning about the issue, but felt the agency workers weren’t too concerned.

“They said people have called about fish dying, but they just figured it was because of the cold,” she said. “They said they didn’t have any plans to fix it, so I said I was concerned because shortly it’ll start getting warm and dead fish equals stinky when it gets warm.”

Slater said typically when there’s a large amount of fish that die due to a winter freeze, the DWR just lets nature take its course. He said residents will probably want to pull the fish out of the lake to keep it looking clean and smelling fresh, but most of the fish will get eaten by birds, skunks and raccoons before they have a chance to really start stinking.

“They’ll disappear pretty quick is what we find,” he said. “It’s just part of the system.”