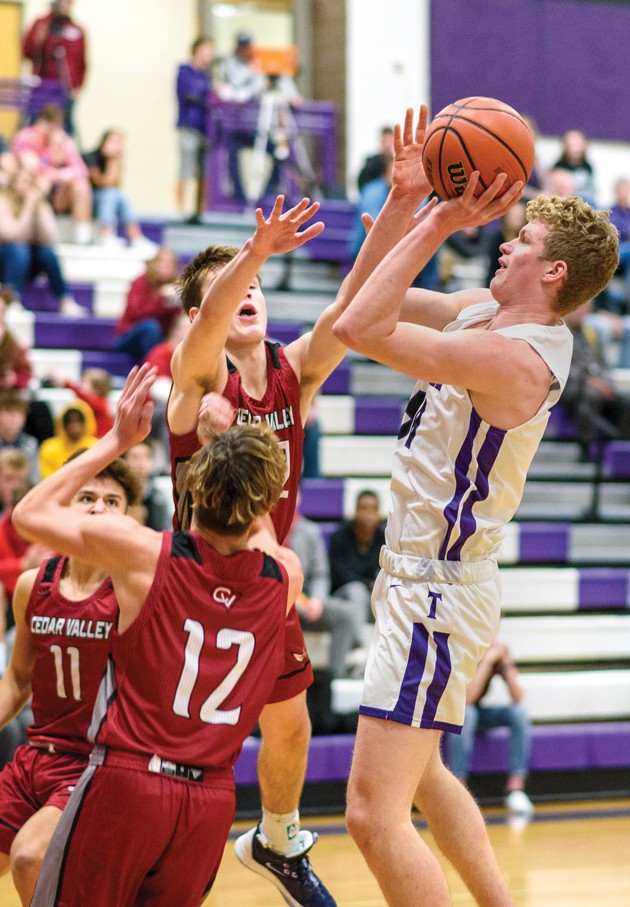 Tooele’s Justin Rogers (40) goes up for a shot during Wednesday’s Region 10 boys basketball game against Cedar Valley at Tooele High School. Rogers had 17 points in the Buffaloes’ 61-45 loss to Juan Diego on Friday in Draper.

The Tooele boys basketball team appeared to have momentum on its side with two minutes left in the third quarter Friday night, having cut Juan Diego’s lead to seven points after trailing by as many as 15.

However, the Soaring Eagle showed exactly why they sit atop the Region 10 standings with a lightning-quick 11-0 run that allowed Juan Diego to coast to a 61-45 win in Draper, keeping the Eagle undefeated in region play.

“The whole third quarter, I thought we played well, with the exception of the last minute,” Tooele coach Jed Thomas said. “The game (Friday) was a lot faster than anything that we’ve played in the last few. (Juan Diego) played a lot faster and they’re good at playing fast.”

Tooele (8-8, 2-2 Region 10) trailed 26-11 with 4:14 left in the second quarter, but closed the gap to 29-19 at the half thanks to a late three-point play by junior center Justin Rogers. The combination of Rogers and senior forwards Clay Freeman and Brandon Vorwaller allowed the Buffaloes to shrink their deficit to 34-27 just over two minutes into the third quarter, and the teams traded points back and forth until a pair of Rogers free throws made it 40-33 with 1:54 left in the period.

But that’s when things started to go wrong for Tooele. Gabe Soto hit a 3-pointer for Juan Diego (10-5, 4-0) to make it 43-33 after a Tooele turnover, and Talon Valdes scored on three consecutive possessions for the Eagle to give JD a 49-33 lead after three quarters.

“It’s kind of deflating,” Thomas said. “I looked up at the score clock and there was almost exactly one minute, they had the ball and we were only down seven. All of a sudden, we went into the fourth quarter and we were down 16.”

Juan Diego led wire-to-wire despite strong play from Tooele’s front line. Rogers finished with 17 points, and Freeman added 12. Freeman recently returned to the Buffs’ lineup, and Thomas is happy to have him back.

“He brings a ton of rebounds and athleticism down low,” Thomas said. “He and Justin (Rogers) — that’s two pretty good rim protectors down there. He brings a lot to our team. He’s got a great attitude and he makes everyone work a little harder.”

Gavin Ware had six points for Tooele as part of a solid all-around performance. Canyon Christensen had four points, having just recently returned from a concussion, while Vorwaller and Julian Mahoe each scored two points and Braden Hogan and Trevor Zaleski each had one.

Tooele faced Uintah in a Region 10 game Tuesday night in Vernal. The Buffs will face Ogden on the road Friday night.

“We’ve still got some work to do,” Thomas said. “We’ve been playing some of our better basketball and we’ve been practicing a lot better. We’ve just got to pick up our game. I think we’re going in the right direction.”

Valdes had 24 points and Soto added 10 for Juan Diego.