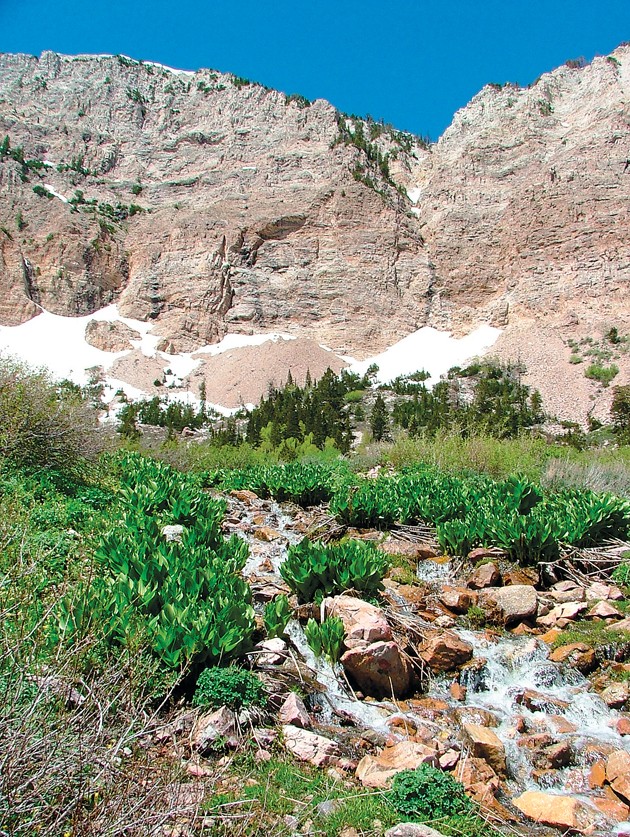 North Willow Canyon is the perfect place to escape the summer heat.

ow that it’s intolerably hot in the valleys, it’s the perfect time to head for the high country. One of the best places to beat the heat is in the shadow of the mighty east facing escarpment of the Stansbury Range above North Willow Canyon.

To get there, follow state Route 138 to Grantsville and then turn south onto South West Street, which is also known as the Mormon Trail. Follow the road south for about four miles until you see a brown U.S. Forest Service sign identifying the road to North Willow and Davenport Canyons. Turn right and head west toward the mountains.

As you head west on this road you will see Grantsville Reservoir to the south on your left. After several miles on a decent but rocky dirt road, you will reach the base of the mountains. If you go straight at this point you will ascend Davenport Canyon. Instead, bear left and south and follow the road around the spur of the mountain into North Willow Canyon. The road will end for most vehicles at the O.P. Miller Trailhead, which is situated near the creek.

There are vault toilets, picnic tables and signs for the Stansbury Front Trail, which you can access heading north or south from this point. Last time I hiked up Left Fork North Willow Canyon, I parked at this trailhead and my wife and I started our hike at around 9 a.m. It was a beautiful sunny day, with blue sky, bright green foliage and pretty yellow balsamroot. We headed west to a junction where you can follow North Fork FR (Forest Road) 539 or South Fork FR 001.

We took FR 001 and not far past this junction you will see a prominent mine dump on the right. This is the old Monarch Mine. There is a small canyon just north of the mine dump with a good little stream, thick aspen and a trail that I have not followed yet. We kept left and followed the main road to where an old concrete water pipe is exposed crossing the road from the southwest to the northeast. Near this point a strange noise can be heard from behind the rock outcrop on the north side of the road. I assume that it is running water behind the rocks. Sounded like an engine or a jet.

We kept going to a junction where a road heads south across the creek into the pines. This road climbs the mountain making numerous switchbacks through the evergreen forest up to the old Metal Queen and Third Term Mining claims. Those areas are likely private property and should be avoided. We kept right at the junction on the main forest road 001 through the wide open canyon bottom that was filled with green plants and golden balsam root flowers.

Strange thing about the Stansbury Mountains: The north facing slopes are densely forested with green conifers — mostly Douglas fir, white fir, and some spruce. The southwest facing slopes are barren all the way up to 9,000 feet and sometimes higher. Such is the case in North Willow Canyon. The drainages are usually choked with cottonwood and box elder in the lower elevations with aspen in the upper reaches.

Above the open floor of the canyon, and past the mine road junction on the bald north ridge, are some curious “Stegosaurus” looking rock outcrops, which can serve as a landmark from a great distance. We came to the end of the road (The length of which from the O.P. Miller Trailhead is very rocky) and met the Wilderness Boundary. At this point we made a costly mistake. We did not see the trail turn back to the northeast but instead followed the creek drainage through dense foliage due west. The next 1,500 feet of elevation gain was a hard fought bushwhack and stair climber event up an incredibly steep open south facing ridge. We had lunch along the spine of this ridge once on top and had tremendous views of the canyon, Tooele Valley and Great Salt Lake far below.

After lunch we continued west along this ridge coming ever closer to the foot of the 10,000 foot escarpment of the North Willow headwall. We were now on an open almost level grassy ridge with Indian paintbrush, Bluebell, Yellow Balsamroot, rocky/craggy peaks strewn with snow slides and drifts clinging to their summits and shadowy places. We came upon a large pine in a group or tiny island of trees along this ridge. This grand old solitary conifer looked much like a Japanese ornamental tree. It is probably a tortured ancient limber pine but I could not be sure. As we were approaching the base of the cliffs, all of a sudden we struck a good trail that was the same trail we missed far below.

Moral of the story is this: At the end of the road in the Left Fork of North Willow Canyon, look for a foot trail angling back to the northeast up the open slope and you will avoid the nasty bushwhack that we endured. The transition from the end of the road to the footpath is clearly discernible on Google Maps in satellite mode, so check it out before you go because it is not so obvious on the ground.

Once you are up under the rim, the setting is almost sub alpine. There is a tiny fast flowing rock bottom creek that issues from tiny North Willow Lake and tumbles tumultuously down the canyon.

The vegetation that exists in this primitive wilderness is very susceptible to damage by trampling so stay on established trails. The views of Tooele Valley and the Great Salt Lake to the north are amazing from up there and the temperatures are a sight cooler as well. So, if you have some strong legs and don’t mind a climb up a pretty decent trail over the 4th of July weekend, consider an exploration up Left Fork of North Willow Canyon.