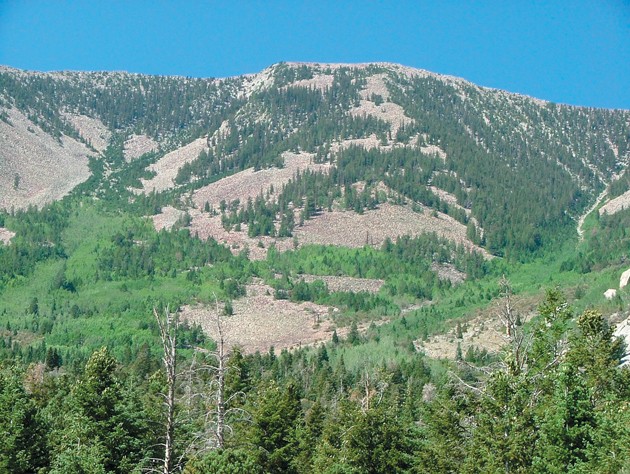 The Deep Creek Mountains in Western Utah have captured the imagination of man for thousands of years. Though they are seldom visited, when approached these mountains cause you to pause and stare at the large, bold peaks that seem to pierce the sky as they rise over 7,000 feet from the salt desert.

Many thousands of years ago, ancient Indians roamed the shores of now extinct Lake Bonneville and surely gathered pine nuts, fished the streams and built lodges in the rocky canyons. Petroglyphs along Basin Creek in the middle of the range suggest that these mountains have been inhabited for a long time indeed. Later on, Desert Archaic Peoples, then Paiute, Shoshone and Goshute Indians all lived in and around the mountains.

Speaking of Lake Bonneville, the eastern slope of the Deep Creeks are where the idea of ancient Lake Bonneville was born. In the 1870s, Clarence King, a 25-year-old graduate from Yale University, was authorized by the U.S. Government to conduct a geological exploration of the 40th Parallel.

He put together a team of well educated, European scientists namely S.F. Emmons, G.K. Gilbert and F. Hayden. If you look at a map of Utah’s Uinta Mountains, you will notice the principle peaks of that range are named in honor of these men, with the tallest peak in Utah (13,528 feet above sea level) named after King. Interesting indeed, but I digress.

Emmons made these remarks in the official report of the reconnaissance of the King Party in the vicinity of the Deep Creek Mountains.

“The lower portion of the eastern slopes of the range toward the Desert are very long and gradual, occupying a width of 4 or 5 miles in a descent of less than 1,000 feet. On these slopes, the ancient lake terraces can be traced, from a little distance, with great distinctness, but, owing to the low angle of the slopes, their actual level is difficult to determine at any one point.”

It must have been amazing to be part of such an exploration back in the day as a scientist when you discover that there had been an inland sea the size and depth of Lake Michigan in this desert waste. This ancient sea would have rendered all of the desert ranges islands, which were certainly covered with pine forest, had glacier tongues terminating in the lake and were roamed by Saber tooth tiger, Mastodon and even giant cave bears — a fearsome skeleton of which is on display in the White Pine County Museum in Ely, Nevada.

Much like the Wasatch Range near Salt Lake City, the most prevalent and distinct evidence of glaciation in the Deep Creeks is found on the rugged west face of the range in the vicinity of 15 Mile Creek. Emmons also wrote:

For reference, water 800 feet deep would almost submerge the massive Kennecott Smelter smokestack located at the north end of the Oquirrh Mountains. Emmons noted that the members of the King Survey documented and measured 12 distinct lake band levels, or what I call bath tub rings, in the bench lands from Redden Springs all the way to the 800 foot level.

As incredible the discovery of Lake Bonneville must have been for the King Survey, a different, much earlier explorer has the distinction of being the first white man to visit the Deep Creeks. That man was Jedidiah Smith. In 1827, Smith and his companions arrived at the Deep Creeks and were disoriented as they had just crossed the Nevada desert.

Smith remarked that he believed their camp was in the vicinity of the Great Salt Lake because the mountains and their abundance of white granite reminded him of the Wasatch Mountains. To his dismay, he soon realized that he was not near the Great Salt Lake and that he and his companions would have to cross the Great Salt Lake Desert. These men nearly died in the process as they struck directly across the flats from the bench of the Deep Creeks and finally found lifesaving water near the base of the Stansbury Mountains.

Several years after the King Survey visited the range, Col. William Eimbeck of the U.S. Coast and Geodetic Survey, lead another expedition into the Deep Creeks. Eimbeck was interested primarily in obtaining detailed elevations and precise triangulation along the 39th Parallel.

In order to accomplish this task, Eimbeck and his team, which consisted of 14 men, six teams and a complete compliment of tentage and scientific equipment, would pioneer trails to the tops of mountains and establish Heliograph Stations. One of the best preserved Heliograph Stations in the west sits atop Ibapah Peak at 12,087 feet above sea level.

Next week’s article will begin with a detailed discussion of this station and the work that was conducted there.