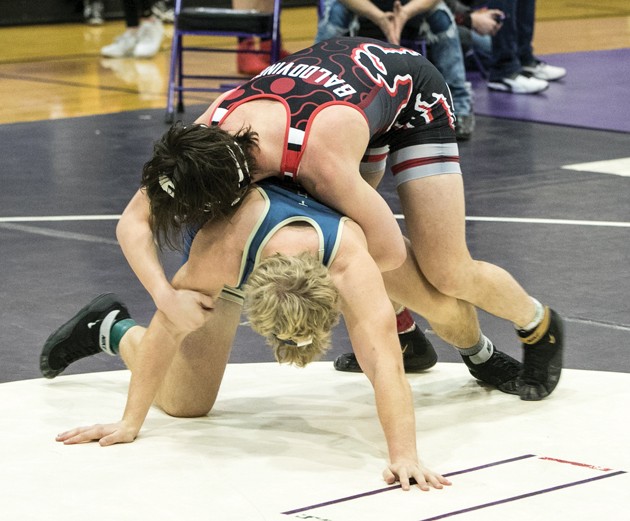 Grantsville senior Cruz Baldovinez competes in the Best of the West Tournament on Jan. 9 at Tooele High School. Baldovinez finished second in the 170-pound weight class at the Class 3A Division B tournament on Saturday in Kamas, earning a spot in the Class 3A state tournament that will take place Feb. 19 in Richfield.

Sixteen to represent GHS at 3A state tourney ♦

The Grantsville wrestling team might not have been able to fill every weight class at the Class 3A Division B tournament at South Summit High School in Kamas on Friday and Saturday, but what the Cowboys aren’t short on is talent.

That was made apparent when 16 Cowboys successfully qualified for the 3A state tournament by finishing in the top eight of their respective weight classes, with another three earning the opportunity to serve as first alternates by finishing ninth. That helped lead the Cowboys to a sixth-place finish, with second and sixth places being separated by just 42 points.

Kole Johnson (106 pounds), Ethan Rainer (152) and Cruz Baldovinez (170) each earned runner-up finishes to lead Grantsville. Johnson beat South Sevier’s Landon Bagley in a 12-1 major decision, and picked up a 4-0 decision over Richfield’s Drexton Torgerson in the semifinals. However, Grand’s Landon Moralez, who has a 26-0 record this season, pinned Johnson (22-5) with 36 seconds left in the championship match.

Rainer pinned Delta’s Kayden Broughton in 1:01, and squeaked past South Summit’s Nick Smith in a 3-2 decision. He then ran into Emery’s Bryar Meccarillo, who improved to 24-2 this season by pinning Rainer in 50 seconds. Rainer is 18-6.

Baldovinez won his first three matches with relative ease, beating South Summit’s Laustin Alleman (14-2), South Sevier’s Ethan Richards (18-5) and Delta’s Samuel LeBaron (9-4). Then, he faced Richfield’s Carston Jensen in a bit of a stalemate, with Jensen prevailing in a 1-0 decision. Baldovinez is 24-6 this season, while Jensen is 18-2.

Grant Rounds (160) and Jonas Floyd (195) will represent the Cowboys as No. 4 seeds at the state tournament. Rounds went 3-2 with pins against South Summit’s Jason Willimas, Emery’s Tyler Stinson and Delta’s Brock Rowley, and Floyd was 2-2 with wins by fall over South Summit’s Jeramiah Jessee and Grantsville teammate Bridger Edwards.

Edwards went 2-2 to finish fifth, with both wins coming by first-period pin against Easton Scott of South Sevier. Tino Baldovinez (126) finished fifth with a 3-2 record, bouncing back from a loss in his first match to earn a spot in the state tournament, and Hazen Atkinson (285) was 2-2 with two pins to capture fifth place as well.

Emery won the division title with 280 points, comfortably ahead of second-place Delta’s 184. Richfield was close behind with 179.5 points, followed by South Summit (175), South Sevier (150) and Grantsville (142). Summit Academy was seventh with 74 points, and Grand was eighth with 34. Maeser Prep was shut out and finished ninth.

The Class 3A state tournament will take place Feb. 19 at the Sevier Valley Center in Richfield, having been converted into a one-day event because of COVID-19 restrictions. The tournament will largely run as normal, except that the losers of the semifinal matches will be placed in the third-place match rather than having to battle back through the consolation bracket.