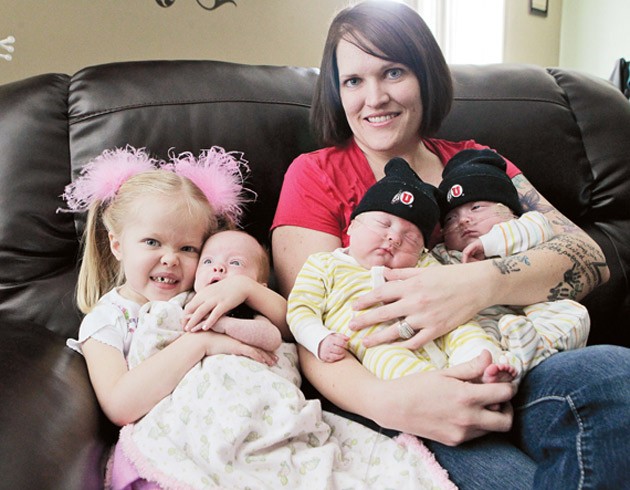 Alyvia, Madison, Tyler, Elysia and Patrick Jones pose for a photo at their home in Tooele Wednesday. The triplets were born 14 weeks before their due date, and after spending four months in the hospital, they finally came home.

Triplets weren’t expected to survive, but they’re home after four months in hospital ♦

To say Elysia Jones was surprised when she found out she was pregnant with triplets is an understatement. The Tooele resident had been told chances were slim of having another baby after her first was born four years ago.

“I wasn’t supposed to get pregnant at all,” she said. “But we decided to try in vitro [fertilization]. Then I had a 25 percent chance of getting pregnant, but my doctor told me that it wouldn’t work. We put in two embryos and one split, so we ended up with three babies.”

Although the babies were born in early September, their actual due date was Dec. 14, 2012.

At 24 weeks, Jones was put on hospital bed rest after her water broke. She said it was nothing short of a miracle that she was able to delay giving birth so her babies had more time to grow — and hopefully live.

“I was told my babies wouldn’t survive, and I don’t know what I did, but I was able to keep them in two weeks longer,” said Jones. “That made their survival rate go from 5 percent to 35 percent in those two weeks. I had Madison at 26 weeks and two days, and kept the boys in two days longer.”

Jones said because Madison was closest to the birth canal, she wasn’t able to keep her in as long as the boys. She kept her in for the two weeks after her water broke, but after that, it became impossible and Madison was born, Jones said.

Although the babies are now much healthier — except for the boys’ oxygen treatments at home — the journey from the beginning of Jones’ pregnancy wasn’t easy. When Jones first found out she was going to have triplets, she was overwhelmed by fear.

During her 26-weeks pregnancy, Jones was often sick. She felt nauseated and vomited frequently, and had to be admitted to the hospital twice.

“I had to go to the hospital because I was gushing blood,” she said. “At that point, I thought I was going to lose the babies.”

Despite the odds against her, Jones gave birth to three living babies 14 weeks before they were due. The babies each spent around four months in the neonatal intensive care unit at University of Utah Medical Center.

“They were on ventilators and then oxygen for a long time,” Jones said. “When they’re that little they can’t do anything. You just have to be quiet and keep things as normal as you can.”

All three babies also had to receive several blood transfusions, and they had to receive a constant stream of medications to fight off infections like meningitis and sepsis. The babies each have a form of chronic lung disease, so they have to be kept in a clean environment to prevent illness.

Jones said if any of them get even a mild cold, their chances of getting respiratory syncytial virus (RSV), or another serious illness, are high. The babies were also fed through a feeding tube until they were full term. The medical costs for each baby was around $2 million, Jones said, but fortunately, her husband has good insurance, which has paid for most of the costs.

“The biggest cost was going into Salt Lake every day to see them and paying for gas,” she said.

When they started to feed from a bottle, the triplets were allowed to go home. Tyler left the hospital on Dec. 30, Madison came home on Jan. 2, and Patrick came home one week ago.

With her husband, Josh, who is originally from Monticello, working in North Dakota’s oil fields, Jones has enlisted her mother, Cecilia Russell, also of Tooele, to help with the babies. Jones said it can be tough while her husband is away at work — this time for two weeks — but the family is getting along fine.

Jones’ first child and daughter, Alyvia, has adjusted to being a big sister and loves it, said Russell.

“She sings to all of them,” Russell said. “She makes up words to songs and sings in a high-pitched voice. She’s also a big helper. She knows where everything is at, like the clothes and binkies.”

Jones said all three babies are really good for her; they typically only cry when they’re hungry or need their diaper changed.

“You’re not up with them any more than any other baby, but you are up feeding them at different times,” she said. “But usually they get up, they eat and then they go back to sleep.”

The babies have also begun to develop their own personalities.

“Tyler is needy and wants to be held all the time,” Jones said. “Patrick is the good boy. He just likes to sleep. And Madison is pretty relaxed. She really only cries when she gets hungry.”

As far as she knows, Jones is the only mom with newborn triplets in the Tooele area.

“I’m part of a Utah triplet moms group, and I can’t find any other triplet moms out in this area,” she said. “We’re big enough out here that you’d think we’d have some, but there aren’t any that I can find. It would be nice to find some local support, but most of the moms I’ve found are in Salt Lake.”

Jones, who has tattoos on her left arm of the babies’ tiny handprints, believes her triplets are a miracle. She has friends who have been pregnant with triplets and weren’t as fortunate as her. Although she predicts the future will be crazy with having four kids — and three the same age — she also knows it’s going to be a lot of fun. Right now she’s not sure if she’ll have any more kids in the future, but it’s not off the table, she said.

“It can’t get much better than having three babies at once,” Jones said. “It’s three times the love.”