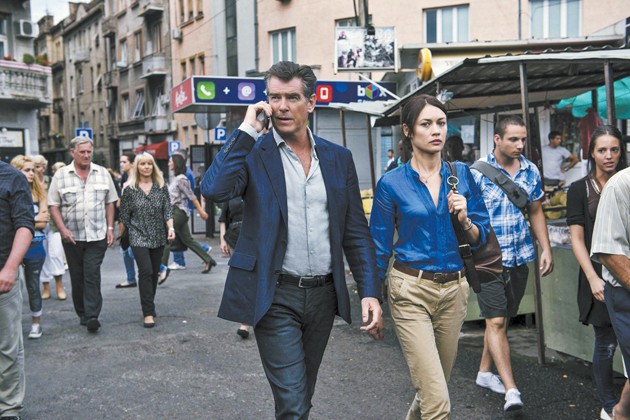 Pierce Brosnan and Olga Kurylenko star in “The November Man,” which starts out as a strong spy movie, only to fizzle by the end. Image courtesy Relativity Media

You know those time-lapse videos where you can see, say, a flower grow and bloom, or the seasons change, right before your eyes?

“The November Man” was kind of like that — in the space of two hours, I witnessed the age of a spy movie’s target audience go up by about 50 years.

Pierce Brosnan stars as Peter Devreaux, a retired spy just trying to live out his goldenish years in peace running a small cafe by an idyllic lake. His little slice of paradise is interrupted, though, when an old colleague, Hanley (Bill Smitrovich), asks him to come back into the game just to help extract an asset from an undercover operation. The operation goes terribly wrong, but Peter begins chasing a clue from the asset’s work.

That clue leads him to Alice (Olga Kurylenko), a refugee assistance worker, who is also being hunted by a ruthless killer hired by the soon-to-be president of Russia, Federov (Lazar Ristovski). Peter’s protégé with a chip on his shoulder, Mason (Luke Bracey), is also chasing the pair as Peter and Alice try to track down a missing refugee girl and untangle political intrigue.

In the beginning, “The November Man” was a pretty tight spy thriller with all the elements of success: a European setting, an old war plot, a game-changing upcoming election, a cat-and-mouse between a student and master, a mysterious woman, a cold-blooded killer and more double-crosses than a jumproping competition. Pierce Brosnan, though he’s getting up there, still has the chops and the scowl to be a convincing movie spy.

Unfortunately, as the story developed, everything started getting muddled. Switchbacks and red herrings are good — nay, necessary — in any good spy movie, but there are so many here it’s hard to keep track. Mason’s dogged hate of Peter seems a little extreme, given the circumstances we’re allowed to see, so he comes across a little flat and that makes everything worse. So he chases Peter, and Peter taunts him with training advice and gets out of a slippery situation after slippery situation with old-school spy tricks, and that’s all well and good… the first few times it happens. Their respective characters together also seem wildly different in motivation and temperament than when they’re apart. It’s just confusing.

This is not to say it’s bad, exactly. It just makes it less thrilling, less suspenseful, less original. If it seemed geared towards the adrenaline-addicted 20s crowd, of which I’ll admit I am a part, by the end it felt like it was courting Brosnan’s peers as an audience. Which, again, is fine. The film just didn’t necessarily age as well as its star.