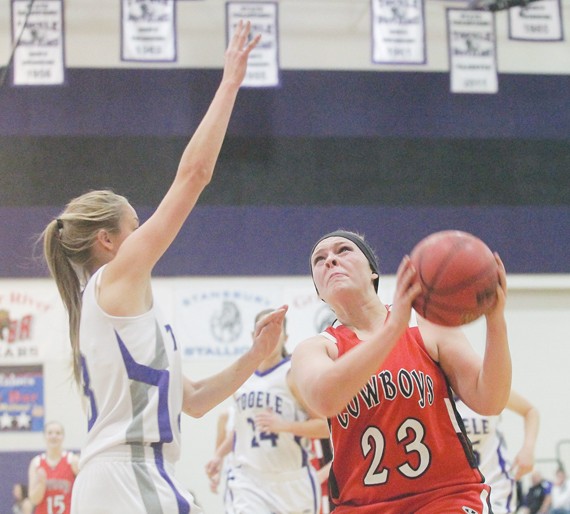 There would be no Christmas miracle for the hard-fought Grantsville Cowboys, as Tooele pulled away in the fourth quarter to send Grantsville to 40 losses in a row, a losing streak that started on Dec. 30, 2010.

“Grantsville played very well,” THS coach Kris Ashby said. “They controlled the tempo. Give them a lot of credit. They had a good plan in place, and they did a lot of good things.”

THS sophomore forward Baylee Hansen put the pressure on after the Matthews 3-pointer and punched the ball loose for a steal. She dished it over to sophomore forward Courtney Schiwal for a layup, and then Schiwal was fouled. She nailed the free throw at 3:53 to make the score 24-22 for GHS.

Schiwal had a break-out performance with 22 points scoring with four rebounds. Her amount of points even shocked Ashby. He said he knew she had a great game but didn’t realize she scored that many points.

Tooele opened the fourth quarter with senior guard McKae Searle finding sophomore guard Taylor Thomas for a jump shot to tie the game at 24. On the next possession, Searle again dished an assist, finding Schiwal for a shot off the backboard and into the net for a 26-24 lead, which was Tooele’s first lead since they led 5-4 at the beginning of the second quarter.

Hansen had a steal at 5:41 and was fouled by GHS sophomore Courtney Van Orden. Hansen made 1-of-2 free throws.

Things started to get out of hand between Grantsville and the referees on the following possession. Tooele missed three shots on the possession and snared in two offensive rebounds. On the final missed shot, a loose ball went out-of-bounds and was called out on GHS senior Whitney Turner, giving the ball to Tooele. She yelled something to the referee and was assessed a technical foul. Schiwal made both free throws on the technical for a 29-24 lead.

Schiwal knocked down another jump shot at 4:33 for a 7-point lead, and then Hansen snatched another steal for a fastbreak layup and a 9-point lead. Finally, after more than 8 minutes without a point, senior Teagan Critchlow found senior Shayla White for a layup to end the run.

But Tooele followed that up with another 7-0 run. During the run another technical foul was assessed to the GHS bench. Schiwal knocked down both of those free throws.

Grantsville coach Allison Smith didn’t want to make excuses for what happened and stuck to the basics as reasons why Grantsville couldn’t close out the game. Even with the two technical fouls and the screams directed at the referees from the Grantsville fans, players and coaches, Smith said the team still has to execute.

“Officiating is the officiating,” she said. “You’ve still got to go put points in the hole.”

She said Tooele’s ball pressure, especially by Hansen on the full-court press, wore down her players.

“We’ve got to get some guards who want to step and handle the basketball,” she said. “They come and go. Some do and some don’t. I think we’ve just got to make sure we have someone that wants to come in, step up and take the ball. We’ve got one of the girls that wants to, we’ve got to have a helper.”

Ashby said he hopes he and his girls can use this game as an eye-opener going forward that there is still work to be done.

“It was a tough loss on Tuesday (Dec. 18), and quick turnaround and play another game here,” Ashby said. “I thought there might be a little bit of rust, a little bit letdown. The girls continue to compete and battle. We finally hit some shots there in the fourth quarter and were able to get up a little bit.”