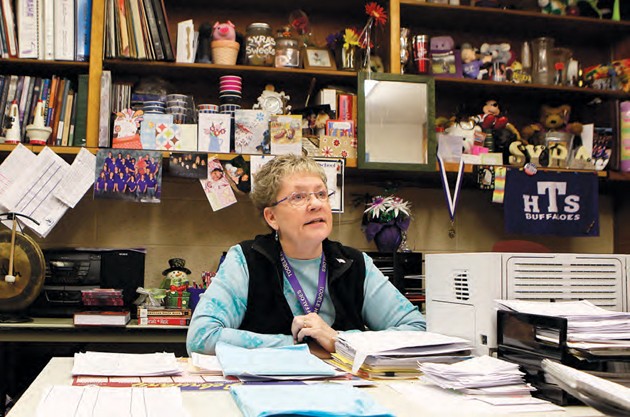 Tooele High School band director Marilyn Syra talks about the marching band’s plan to raise funds for a trip to the 2013 Pearl Harbor Memorial Parade Wednesday afternoon in her office. The THS marching band has been invited to represent Utah in the parade.

February 14, 2013
THS marching band headed for Hawaii if funds can be raised

On the morning of Dec. 7, 1941 Japanese forces unleashed a surprise attack on the U.S. Naval Base in Pearl Harbor, Hawaii.

One of the first ships to sustain damage that morning was the USS Utah. The remains of that ship, where 58 men lost their lives, are still visible from the memorial in Pearl Harbor. Every year a parade is held on Dec. 7 in Waikiki to commemorate the anniversary of the attack on Pearl Harbor. A marching band from each state that had a ship bearing its name and moored in Pearl Harbor that morning, is invited to participate in the parade.

Tooele High School’s marching band has been invited to represent Utah in the 2013 Pearl Harbor Parade.

“This is quite an honor for our band,” said Marilyn Syra, Tooele High School band director. “The organizers of the parade ask the directors of larger bands for recommendations of bands from smaller communities. This is an honor that comes from our peers.”

This wasn’t an invitation that Syra sought or applied for, and no audition tape was submitted. In fact, she nearly tossed out the envelope that contained the parade invitation; she thought it was a solicitation from a fundraising company.

Before she accepted the invitation, Syra polled parents in the band boosters organization. She was pleased to find that 98 percent of them supported the trip.

Syra also conducted a survey of band members, which also came back with overwhelming support.

Finally she had to stand before the Tooele County School Board and request permission for outof- state travel.

Board members gave that authorization during their Feb. 5 meeting, with one caveat: Syra must meet with district administrators to establish a fundraising goal timeline to assure progress is being made to raise money for the trip without relying on general school funds. Syra estimates the trip will cost $1,750 per person and anticipates that the trip will include 100 people plus chaperones. The December 2011 trip the marching band took to the Holiday Bowl cost $660 per person.

“It’s a lot of money,” said Syra. “It will be lot of work, raising the money and preparing to march in the parade. It isn’t all fun. Well, yes, marching in the parade will be fun, but it will take a lot work to get there.”

The fundraising goal is to raise enough funds to pay for the entire cost of the trip. Trip costs include airfare, lodging and meals.

Donations, business sponsorships, and concession sales are among Syra’s list of fundraising ideas. She recognizes that the cost of the trip will require support from outside of Tooele County.

“We will be representing all of Utah, so we will be asking for sponsorships from large businesses from outside the county,” she said. “We also want to make sure we don’t disrupt the fundraising plans of other organizations as we solicit help.”

The trip to Pearl Harbor is about more than marching, according to Syra.

“This trip is about history, our country, and patriotism,” she said. “We will visit the memorials at Pearl Harbor and learn about sacrifice. It is an honor to represent Utah in the parade to remember what happened at Pearl Harbor.”