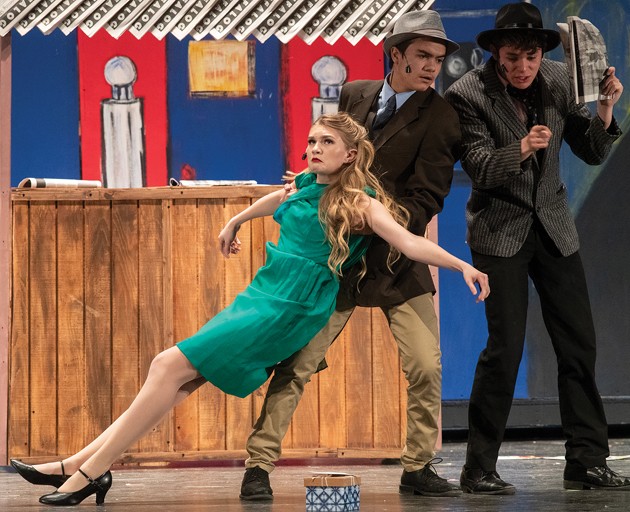 Tooele High School Theatre will present the 1950 Broadway hit musical “Guys and Dolls” this week as its final production of the school year.

The musical is a romantic comedy involving the unlikeliest of pairings from Manhattan, New York. Main characters include a high-rolling gambler, a puritanical missionary, a showgirl dreaming of the straight-and-narrow and a crap game manager, according to stageagent.com.

The play opened on Monday in the THS auditorium and runs Tuesday through Saturday at 7 p.m. There also is a 1 p.m. matinee on Saturday. A final show is set for Monday, May 6.

“Opening night went wonderfully, but we had a small crowd,” said director J. Scott Henrie. “The dancing was phenomenal. We had a few technical glitches, but we will iron them out. It’s a cute show. I’m so proud of the students.”

The play is based on books written by Jo Swerling and Abe Burrows. It won a Tony Award for Best Musical in 1950 and songs written by Frank Loesser.

The show is double-cast with about 65 students participating as either actors or as stage crew.

Henrie said people shouldn’t miss this good, old-fashioned musical based on a Sunday morning comic strip. He said the musical shows that love is a gamble, but it’s a gamble worth playing, because even though we lose sometimes, we just might win!

In a text today, Henrie wrote that it has been an amazing year for theatre in Tooele Valley.

“Some of these kids have been in non-stop shows since last year’s ‘Damn Yankees,’” he wrote. “… Such a talented group. I’m really going to miss them.”

Tickets for “Guys and Dolls” are $8 for adults and $5 for senior citizens, students and children. All tickets are reduced by $1 for Saturday’s matinee.