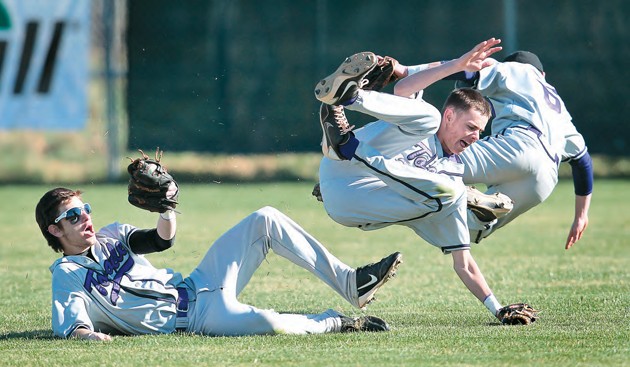 Tooele’s Jack Memmot holds onto the ball after colliding with Justin Pollmann and Tyson Vigil in center field Monday against Grantsville.

Taking advantage of four timely hits, two walks and two hit batters, Tooele scored six runs in the third inning and held off Morgan for a 6-4 Region 11 victory on Thursday.

After little noise in the first two innings, Tooele sent 11 batters to the plate in the third. Leading off the inning, outfielder Jack Memmott greeted Morgan pitcher Josh Duncan with a deep double to right-center. Justin Pollman, playing second base, was then hit by a pitch. Outfielder Tre Behunin loaded the bases with a sharp single to left field.

Catcher Tyler McMain hit a deep shot to center to score Memmott on a sacrifice fly and Tooele led 1-0. Shortstop Tyson Vigil added an RBI single, knocking in Pollman and Behunin scored on a pitcher’s balk. Center fielder Chase Weishaupt hit the Buffs’ second sacrifice fly to score Vigil and Tooele jumped out to a 4-0 lead.

With two outs, pitcher Tyler VonHatten worked Duncan for a walk and stole second and third. But as he slid into third base, he strained his lower leg and Zach Jeffers came in to run for him.

First baseman Tyler Butler then drew a walk and Memmott came to bat for the second time in the inning. He lined a single to knock in Jeffers and Tooele had scored six big runs.

Pitching an excellent game, VonHatten gave up a leadoff single in the first inning to Colby Skinner, but then retired nine straight Morgan batters through the first three innings. But the injury to his leg in the third inning slide made it tough to pitch. He hit Cam Skinner with a pitch and gave up a double to Lantzen Toomer to start the fourth inning. Coach Catham Beer pulled VonHatten to avoid further injury to one of his top pitchers.

Drew Sanders came in from third base to relieve VonHatten. Cleanup hitter Jarret Cameron greeted Sanders with a sharp single to score Skinner and Toomer and cut the Tooele lead to 6-2.

Morgan opened the fifth inning with Landon Carter lashing out a single. Colby Skinner hit a shot at Sanders, who snagged the liner and doubled up Carter, who was heading for second. This double play, followed by a fly out to center, got the Buffs out of the fifth. But Morgan continued to attack as they opened the sixth with consecutive singles. Sanders struck out Daniel and got Carrigan to ground out to first. Morgan scored one run on a Tooele error and Brenyn McConnell singled in Jarret to bring the score to 6-4 after six innings.

Sanders worked Morgan for a strikeout and two infield outs to stop Morgan in the seventh inning and secure the 6-4 win for Tooele.

Memmott led the Buffaloes with two hits and an RBI and Behunin and Vigil grabbed the other Tooele hits. The Buffaloes host Stansbury today and Ben Lomond on Tuesday, April 10.