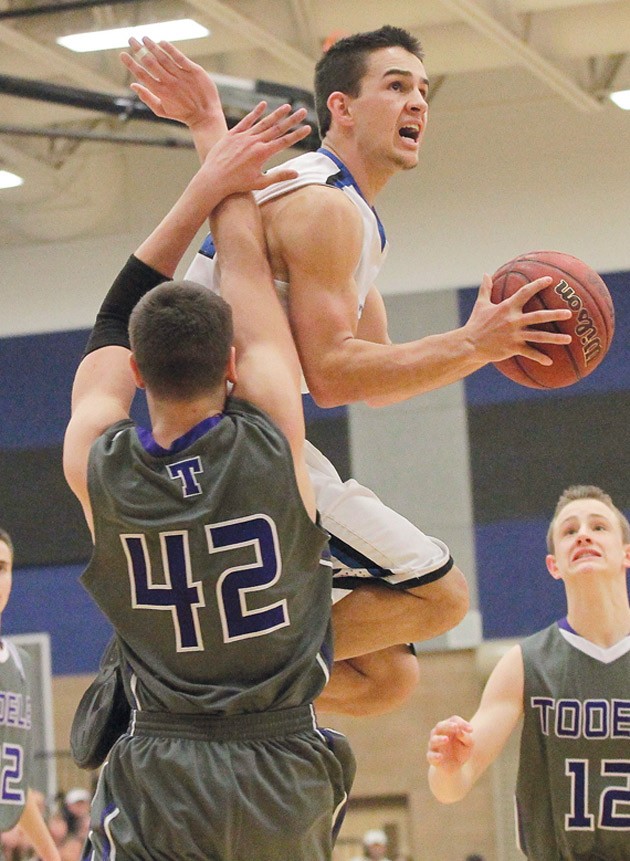 Stansbury High School’s Ryan Robbins drives to the basket Friday night against Tooele’s Aaron Tippets. Robbins led Stansbury in scoring Wednesday night at Ogden with 16 points with most of those coming in the fourth quarter.

Ogden’s Spencer Smith picked up where he left off from the last time he and the Tigers took on Stansbury with a furious first quarter, doing just enough to hold off the Stansbury Stallions 63-55 and mathematically eliminate them from a spot in the playoffs.

Smith scored 10 points in the first five minutes on the strength of two 3-pointers, and then a steal leading to a fastbreak layup to put the Tigers ahead 12-2. The Stallions then put all their focus on Smith, forcing the Tigers to adjust and have other players step up. Smith scored just 5 points the rest of the way, finishing with 15 total, but the others made contributions.

“I was so proud of my guys tonight for that adjustment, including Spencer,” Ogden coach Shawn MacQueen said. “He didn’t really force the issue. There’s going to come times when they do the junk defenses to take Spencer away, and we’re going to have to have some help from other people.”

They got just that as three other Tigers scored in double figures, and another one scored 8 points. The Stallions forced the issue late with a fourth-quarter comeback, trailing 47-36 at the start of the final quarter. They battled to cut the Tigers’ lead to 51-47 thanks to a scoring spurt by senior guard Ryan Robbins where he scored 8 of the team’s 11 points. But two free throws by Ogden’s Emiric Egbert, and a 3-pointer and put-back layup by McKay Smith, made the score 58-47 and out of reach.

“I’m proud of our guys,” Stansbury coach Ryan Harris said. “We have character kids. I think we were just a couple of possessions away from it being a different story.”

Harris said his team did a good job on Spencer Smith after the initial outburst, noting that the other Tigers did what they had to do.

“They’re tough,” he said. “[Egbert] hit some big shots. They’re good spot-up shooters. They play so well off each other, off (Spencer) Smith really. They’ll just get out there and set-shoot, and he draws a crowd and he kicks. If you’re not right in those kids’ laps when they catch it, then they’re good.”

Harris said he felt the Stallions played better in this game than they did in the last-possession loss to Ogden on Jan. 4 in Stansbury.

“We’re better than our record shows,” Harris said. “That’s the part I feel bad for our kids is that it’s not showing up in the win column.”

With this loss the Stallions have been mathematically eliminated from competing in this year’s postseason, but Harris said his players will continue to battle, hoping to accomplish one of the team goals of making sure they’re better at the end of the year than they were at the beginning of the year.

“Our goal is to try to become the best team we can become by the last game,” he said. “Nothing has really changed as far as we’re going into practice, still trying to become the best team we can be on the last day. I think if we continue to progress, then things take care of themselves. If you put it in that perspective, then you can continue to come to practice every day regardless.”

The Stallions never held the lead against the Tigers, but they made a few runs to cut into it. The Tigers took a 16-6 lead into the second quarter, and the Stallions got their comeback started with a 3-pointer by sophomore guard Shane Andrus. He then was fouled in a later possession while shooting a 3-pointer, and he hit all three of his free throws. Robbins then found junior guard Tanner Barton open for a 3-pointer to cut the lead to 22-15. Following an Ogden timeout, senior guard Tyler Johnson, Robbins, senior forward Stone Tia and senior guard Niko Chacon all scored to cut the Tigers’ lead to 3. The two teams went into halftime with the Tigers leading by a score of 28-25.

However, the Tigers came out of the gates firing to start the third quarter. Dayton Wright hit two 3-pointers, and Spencer Smith scored on a fastbreak layup. Before the Stallions knew it, the Tigers led 39-29 and held on to that double-digit lead going into the fourth quarter.

The Stallions had eight different players score on Wednesday. Robbins finished the game with 16 points, Chacon scored 14, Tia 8, Andrus 6, Barton 5, Johnson 4, sophomore forward Gage Manzione 4 and sophomore guard Cody Barkdull 2. Tia and Chacon led the team in rebounding with four each, and Robbins led the team in assists with four.

“We’ve been on the road a lot in the first part of our region schedule,” MacQueen said. “We really felt like we need to take advantage of this stretch where we have home games now. We needed to treat it with a business-like atmosphere and attitude.”

The Stallions have two games remaining on their schedule — a road contest on Wednesday at Bear River and the season finale at home against Ben Lomond.