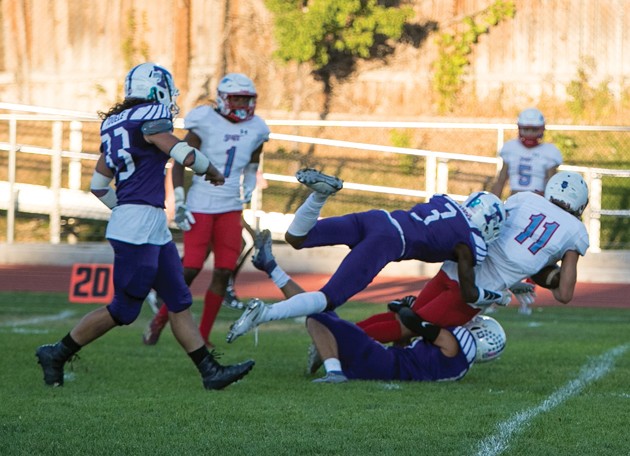 It was a story of what could have been for the Tooele football team on Friday night in Ogden.

Twice in the second quarter, the Buffaloes got inside the Ogden 5-yard line, seemingly destined to score a touchdown in a game the host Tigers led 7-0. Twice, Ogden’s defense held strong and kept Tooele out of the end zone, preserving the Tigers’ narrow advantage.

Ultimately, those missed opportunities came back to haunt the Buffs in a 21-7 loss that dropped them to 1-2 in Region 10 play and 1-5 overall. Tooele finally broke through for its lone score of the game on a 50-yard double pass to Gavin Brown with 7:02 left, but Ogden (4-2, 1-2) answered with a four-minute, 12-play, 80-yard drive that culminated in running back Logan Shobe’s third touchdown run of the evening to all but end the Buffs’ comeback hopes.

Both teams were sloppy at the beginning of the evening on Ogden’s homecoming night. Tooele fumbled the ball away on its first play of the game, only to get the ball back three plays later when the Tigers coughed it up on the THS 29-yard line. The Buffs appeared to have some momentum going, breaking into Ogden territory before fumbling the ball again on third-and-1 on the Tigers’ 49-yard line.

This time, Ogden took advantage of good field position, as Shobe took a toss from quarterback Jaice Holt and sprinted 50 yards down the left sideline for the Tigers’ first touchdown of the game. Later in the first quarter, Tooele’s offense moved the ball into Ogden’s end of the field yet again, aided by a 23-yard run by Anthony Cole on third-and-6 that set the Buffs up on the Tigers’ 37-yard line. However, the drive stalled after a false-start penalty and a sack, and Tooele ended up turning the ball over on downs.

The Buffs seemed to gain momentum from that drive. Thanks to a 15-yard face-mask penalty, a 13-yard run by Mateaki Helu on third-and-3 and a 20-yard run by Cole, Tooele drove 74 yards in seven plays to set up first-and-goal on the Tigers’ 6-yard line. A pair of 3-yard runs by Cole, sandwiched around a 1-yard loss by Justic Tadifa, got the Buffs to the 1-yard line, but Tadifa was stopped on fourth down.

The Buffs’ defense forced the Tigers to go three-and-out from there, and a good punt return by Payton Sprouse gave Tooele the ball on Ogden’s 27. Cole had an 11-yard run to move the ball to the 16, and a 2-yard run by Tadifa with an Ogden face-mask penalty got the Buffs to the 7. After a 5-yard run by Cole gave them first-and-goal from the 2. Ogden held strong again. Tadifa got the Buffs to the 1 on first down, but Helu was stuffed on second down and Cole was stopped on back-to-back plays just before halftime.

Ernest Gurr intercepted Holt on the Tigers’ first possession of the second half, but Tooele went three-and-out on its ensuing drive. That set the stage for Ogden’s second touchdown, as OHS went 63 yards in 12 plays — including three third-down conversions. Shobe scored from a yard out to put Ogden up 14-0 with 3:07 left in the third quarter.

Tooele came away from its third foray into the red zone empty-handed, as well. The Buffs got inside the Ogden 20 with a 15-play drive that included a 24-yard run by Tabor Shepard and a 16-yard pass from Tadifa to Gavin Brown on third-and-9. The drive was further aided by an encroachment penalty against Ogden on fourth-and-3 from the 21, giving the Buffs a first down at the 16. Tooele reached the 9-yard line on back-to-back runs by Cole, but Cole was stopped for no gain on third down and a pass from Tadifa fell incomplete on fourth down.

Tooele will travel to Eagle Mountain on Friday to face Cedar Valley in a Region 10 contest.