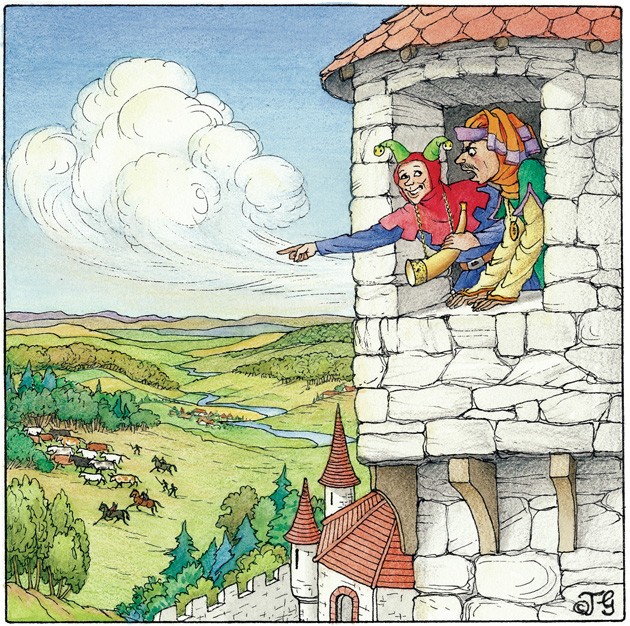 September 4, 2012
Till Eulenspiegel in the Tower

Till Eulenspiegel was born near the forest Elm, and from the very beginning Till’s life was a rare one. It started on the day he was baptized. After the chapel baptism, he was carried to a beer house for the celebration, as was the custom. Late in the evening, Till’s godmother was carrying him home, but as she was taking a shortcut over a bridge, she slipped and fell into the dirty water. Someone rescued the boy and carried him to their village to clean him up. That is how Till Eulenspiegel was baptized three times in one day — first in the chapel, then in a dirty brook, and a third time in a clean, warm bath. And so began his many adventures.

Till became a doctor, a dentist, a smith, a cobbler, a tailor, a tanner, a butcher, a horse dealer, a clown and a monk, and he was always known as a trickster, forever playing pranks. The stories of his antics spread far and wide, like the story of the Count of Anhalt.

Till went to see the count to seek work, and the count hired him to be his watchman.

“Sign a pledge of allegiance to me,” the count said.

So Till signed on, though he had hoped to be a knight or a soldier, not a watchman.

Till took his place in the tower. In the meantime, knights and soldiers came to stay in the count’s castle, prepared to protect him from his enemies. As they waited, they were treated to great feasts and celebrations, and Till sat in the tower hoping the count would call him to join in. But this was not to be. Till sat in the tower, never invited to the feasts.

One day the enemies of the count crossed the border and invaded his land. Till sat in the tower watching them, never sounding an alarm. He watched as the enemy rounded up all the count’s cattle and drove them away, over the border.

As the cows were being herded across, they began to moo. Hearing the sound, the count looked out and saw what was happening. But it was too late.

He hurried to the tower and saw Till was wide awake and was not hurt. No, indeed, he was watching the enemy drive the cattle away. And worse than that, Till Eulenspiegel was laughing.

“What?” the count cried. “My enemy is driving away our cattle and you’re doing nothing? Why did you not sound an alarm?”

Till looked at his horn. “There’s no need,” he said. “The fields are full of your enemy. If I sound the horn, everyone will know you’re invaded and your other enemies will come help themselves!”

The count was furious, but he saw he could not change Till’s mind. He hurried out, rounded up his soldiers and rode after the enemy.

A few days later, they returned, satisfied. Although the cows were dead, the count and his men recovered great stores of smoked meat from the stolen cows. The cook began to boil and roast the meat at once. He served the soldiers and the knights and the count heaping portions. The scent of that meat wafted up to the tower. Till’s mouth began to water.

On and on went the party, and Till waited for someone to bring him his share. But at last, near midnight, when it was obvious no one would invite him to join, he raised the horn and let out three long blasts: “Enemy! Enemy! Enemy!”

Hearing the alarm, the count and his soldiers jumped up from the table, put on their armor and rode as fast as they could out to the fields. When they were gone, Till came down and filled himself up with all the meat he desired.

Then he returned to the tower.

Meanwhile, when the count and his soldiers found no enemy, they understood the watchman had played a trick on them. They rode home as fast as they could, and the count hurried up to the tower.

When he saw Till sitting there, he cried, “What’s wrong with you? When the enemy came, you made no sound. When there was no enemy, you raised the alarm. You are not suited for this job!”

He sent Till to be a footman and hired a new tower watchman.

Till had not liked being a watchman, but he liked being a footman even less. He was eager to escape the count’s service, but he could not escape his pledge. And so, whenever the soldiers set out after the enemy, Till made sure he was the last to leave the city gates. When they were coming home, he was always the first one back.

Till smiled and said, “When and your servants ate, I sat alone in the tower, faint with hunger. I pledge this: When I become strong again, I shall be the first and last to face the enemy. Until that time, I’m working on recovering my strength.”

The count was furious when he heard this, and he said, “You will no longer serve me. I release you from your pledge.”

And so Till was happy again, ready for another adventure.