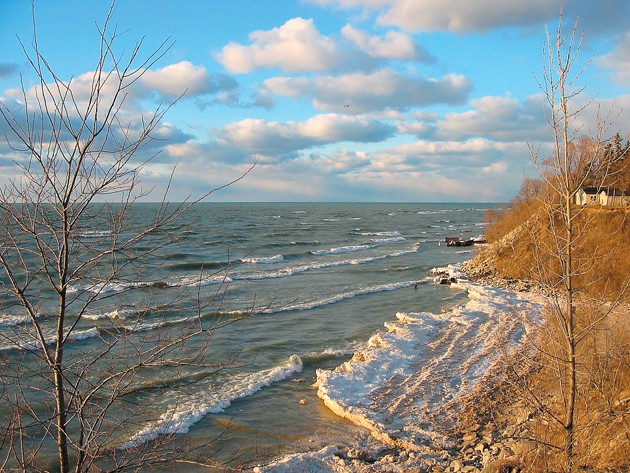 Thanks to his childhood growing up beside Lake Michigan, Dave Bern feels right at home in Lake Bonneville’s old stomping grounds. This view is of Lake Michigan during winter from Bern’s childhood home.

Beaches are important to me. So are lakes. To my good fortune, I lived beside both while growing up on the southwest coast of Michigan.

My parents’ modest wood and brick home stood on a 100-foot-high bluff of glacier-crushed sand and stone that overlooked big water the Ojibwe Indians called “Mishigama.” French explorers and Jesuit priests, perhaps annoyed by that moniker’s lack of Parisian cachet, or just flexing some good old whitey hubris, changed it to Le lac Michigan. The latter stuck, unfortunately. Just look at a map.

As a young boy during the 1960s, the neighborhood kids and I spent nearly every summer afternoon in Lake Michigan. Whether it was waveless and silent, or roiled with mad surf and hidden, deadly undertow, we were happily immersed. Our favorite task was to gulp air deeply into our lungs and then dive down to grasp handfuls of sand from the bottom, or body surf back to shore with our arms out like wings and our eyes squeezed shut. It was the next best thing to flying.

When we weren’t swimming, we’d comb the beach for fossils and other ancient treasures that washed up from Lake Michigan’s depths, or make enormous yet artistically contemptible sand castles that only a kid could admire. And always nearby, there were two beachside essentials: A small fire to warm oneself or to cook Oscar Meyers on a stick to a charred crisp, and a transistor radio perched on a piece of bleached driftwood playing rock n’ roll from a Chicago radio station 70 miles away across the lake. It was the endless summer format fulfilled.

However, when the school year began and was followed soon after by the arrival of winter, our time at the beach and lake plummeted. But despite school and cold days of brief sunlight, we were still drawn to the water — or should I say ice? Along the shore and extending several yards into the lake were massive piles of twisted ice heaved skyward by storm-driven waves. These piles of ice and snow, stained brown by wind-tossed sand, were sometimes more than 15-feet high. Thin ice usually loomed around their bases, yet despite the danger of falling through, we’d bravely climb them and pretend we had conquered K2.

Once, when I was about 8 years old and exceptionally stupid, I went out on the ice alone. Not wanting to let such stupidity go to waste, I made a series of reckless choices that culminated in my discovery of how cold Lake Michigan’s water can be in winter. Because of sheer luck, or a kindly divine hand, I pulled myself out. By the time I got home, my clothes were frozen stiff, and a 100-percent pure wool sweater, which my aunt had made entirely by hand and given to me for Christmas, drooped to my shins like a dress. What did my mother say when she saw me walk through the kitchen door? I don’t need to tell. If you were 8 once and had a mother while at that age, you know exactly what she said — and did. Thankfully I had enough sense to take my boots off before I stepped inside.

So why has this former beach and lake punk spent the past 35 years living and working 1,500 miles away from beloved Mishigama? I do miss Lake Michigan and its inviolable water that, like a baptismal font, washes away all sin every time you dive in. I try to return home often to visit family. If it’s summer, I quickly head for the waves like a pilgrim at Lourdes — for every Michigander who has moved away carries many sins for which to seek forgiveness. But oddly perhaps, the degree of my longing for beach and lake isn’t as strong as you might think.

The reason why, I’m convinced, is Tooele County’s grand panorama. Its landscape makes me feel right at home. Yes, I know. The county is a bit on the dry side. Great Salt Lake and the handful of perennial streams and reservoirs don’t offer much in beachside or lake-time amenities. But that’s OK, and not just because the largesse of Deseret Peak, the Bonneville Salt Flats or the Great Salt Lake desert inspire my creatively-challenged imagination to contemplate something more arcane than if the next software update from Apple will improve the battery life of my iPhone. The bigger reason is just about everywhere I look across the county’s staggering girth of 7,000 square miles, I see a ghost that reminds me of home.

This ghost is from an enormous freshwater lake, nearly as big as Mishigama and surprisingly deeper, that once was here.

When Lake Bonneville — Great Salt Lake’s ancient predecessor — was at its highest level some 15,000 years ago, it was more than 1,000 feet deep at today’s Lake Point. Its surface area, which covered lots of western Utah real estate, was nearly 20,000 square miles. For comparison, Lake Michigan’s maximum depth is around 900 feet and its surface area is just over 22,000 square miles. Being offspring from the last Ice Age, the lakes could be considered distant cousins.

Before mighty Lake Bonneville receded to become today’s much punier Great Salt Lake, its powerful waves and hulking depth left behind an indelible and unmistakable ghostly signature — row after row of watermarks, terraces and beachheads on mountain sides, sandbars, spits and bays strewn across valley floors.

In my view, there is no better place than Tooele County to see what Lake Bonneville’s waves left behind. Every time I’m “Out and About,” whether I’m admiring the northern Oquirrh Mountain’s high rocky crags, or standing at Simpson Springs and looking across the county’s desert outback, that ghost of deep, ancient water pulls hard on my genetic origins, my Great Lakes Region DNA. I don’t see a lack of water. I see where water once was — everywhere.

As a kid, I routinely walked out of my parents’ home and stood atop that 100-foot high bluff to watch countless sunsets sink into old Mishigama, or storm squalls blow in from the northwest. And many times, I wondered what would it look like if all that deep blue were to vanish. What would be left? What would be out there?