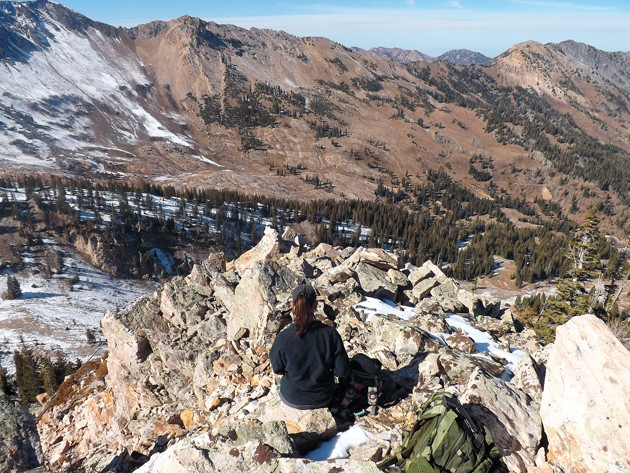 October is a wonderful time to visit the mountains. After the leaves have fallen and you can see through the trees, the mountains reveal boulders, ravines and hidden places that were hidden during spring and summer.

The air is also crisp, the skies are often clear and even though there may be several inches of snow clinging to north-facing sides of high peaks, the south-facing slopes and ridges are often bathed in warm, late afternoon sun.

Before I describe an incredible October hike to Toledo Peak that my wife and I took last week in Little Cottonwood Canyon, I want to discuss hiker safety. Unfortunately, this last Sunday, a hiker died in Big Cottonwood Canyon. He broke one of the cardinal rules of hiking: never go alone.

Not only was he alone but he tackled a seriously difficult peak. Judging by the outcome, it may have been beyond his skill level. Apparently, the hiker summitted Sundial Peak, which is a difficult, rugged tower that rises dramatically to over 10,000 feet above sea level between Lake Blanche and Peak 11,033 in popular Mill B South Fork of Big Cottonwood Canyon.

The hiker posted selfies on the summit, but when he didn’t show up to places he should have on Tuesday, a search was made and his body was found. From reports I have read, he fell over 300 feet off Sundial’s cliffs.

While outdoor adventure and extreme hiking and climbing are thrilling experiences, they are not worth dying for. Make certain that you hike in a group or at least with another person. I have often hiked alone but when I do, I run the risk of becoming the headline for the next news cycle. Be prepared and know the limits of your experience level. Don’t test the weather up in the mountains. Save your ascent for a nice sunny day and hopefully you will see your next sunrise.

Now, on to 10,360-foot-high Toledo Peak, which is a distinct summit that rises dramatically above the town of Alta to the north on the ridge that separates Little and Big Cottonwood Canyons. The peak sits atop the ridge between Cardiff Pass and 10,530 foot-high Flagstaff Mountain and looms above Toledo Bowl, which is named after the mine that produced millions of dollars of silver ore in the late 1800s.

Many of the surrounding peaks and terrain features, like Flagstaff, Emma, Grizzly Gulch, etc., are named for old mines that made Alta one of the most notorious boom towns of the Old West. Toledo Bowl is conspicuously clear of large stands of evergreens or aspens because of massive avalanches that charge down the bowl each winter.

Toledo Peak and its surrounding area offer numerous trail choices from beginning to expert. They are all relatively short routes, which makes this area convenient for the hiker who does not have all day.

To get there, follow SR-210 up Little Cottonwood Canyon approximately eight miles to the vicinity of the Alta Town Offices. Find a place to park in the large road margin on the north side of the road and then make your way up the little side road that climbs past the Alta Town Offices and Marshal’s Office. This road climbs through aspen and turns from paved to dirt. It next makes a sharp right turn and heads east through the trees.

Not long after this turn, you will notice a road junction near some tall, rusty metal platforms. These platforms are used by the U.S. Forest Service and other organizations to dig “snow pits” and measure “tinsel strength” of the snow pack, which is necessary data for forecasting avalanches.

At the road junction near these platforms, take the left fork and follow that road for about another .8 of a mile up several steep switchbacks to an obvious, well-beaten trail that leaves the road and heads west up a slope. This is the route to Cardiff Pass and Mount Superior. You can identify it clearly by the giant old stump that is clinging to the face of the mountain here.

But instead of following that branch trail, stay on the main, old mining road and follow it as it climbs through a stand of sub alpine fir and up to large white and yellow dumps of the Toledo Mine.

The mine area is interesting because a tiny flow of dirty water flows from the mine entrance. There are also old rusty rail tracks, pieces of timber, various metal parts and one large boiler at the site. The views from the mine dump across the canyon to 11,068-foot-high Mount Baldy are striking.

For those who want a simple, safe, straight-forward hike, the trail ends here. For hikers who are fit and experienced, the adventure begins here. Just left of the mine portal they can follow a deer trail up through rocks and boulders, and after a steep ascent, they will be on a high, grassy slope.

This slope is steep to the extreme and on our hike, we went right up the face of it to the summit ridge of Toledo. Once we topped out on the ridge, we had incredible views down into Cardiff Fork of Big Cottonwood Canyon. We followed the rocky broken ridge west over a false summit and around a few limber pine snags to the true summit, which consisted of lichen covered granite boulders. The lichens were bright green, yellow and orange.

The back side of this peak and the surrounding mountains were covered with several inches of snow, which made the view west to 11,132 foot-high Mount Superior a spectacular scene.

We sat up there for about an hour eating our lunch in the late October sun on a peak few will ever visit, and then we carefully descended by the same route. This mountain and its neighbors are not destinations for the faint of heart or anyone who may have a heart condition. But the lower trails in this area are great for anyone, and due to the historic mining activity, shorter, safer excursions can be highly interesting.

Again, remember to keep you, your friends and loved ones safe while hiking. Avoid this area and bowl during winter due to extreme avalanche danger.