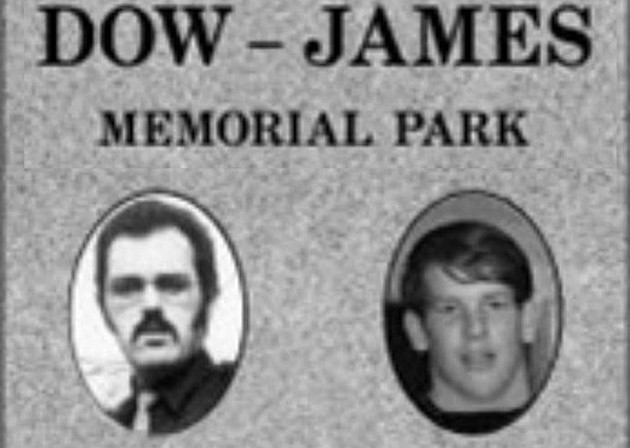 Tooele City officials plan to build a monument in remembrance of two firefighters killed in the line of duty at a wildfire near Stockton.

The story begins on Aug. 26, 1975, in Tooele City when fireman Wayne Dow and his family were having dinner. During their dinner, they heard a siren. The siren got closer and it turned off in front of their house. Suddenly, a police officer burst into their home and told them Dow’s brother, Lauren had been burned in a fire, according to Shilo Baker, Tooele City mayor’s assistant.

The family rushed to the Tooele Hospital where Dow’s brother and another man, Dan James, lay unconscious.

A helicopter from Dugway Proving Grounds rushed both men to the University of Utah Hospital in Salt Lake City.

Dow discovered that earlier in the afternoon, wildfires had broken out near Stockton, about five miles south of Tooele.

As was procedure at the time, the Sheriff’s Department responded to join suppression efforts with state, Army Depot, and Stockton firefighters.

Lauren Dow, a member of the Tooele City Volunteer Fire Department and a deputy sheriff, was off duty, but he headed towards the fire in a brush truck with James, a Tooele City Animal Control officer and a young man who wanted to become a deputy, to fight the fire.

The truck, which was an old surplus pickup with a water pump and hose reel, had no radio and little other equipment. The windows didn’t roll up and the crew wore jeans, boots, and light shirts.

Because the Sheriff’s Office was in charge of wildland fire, the Tooele Fire Department was not dispatched.

Sheriff Bill Pitt was in charge of the firefighting efforts but he was busy with the fire, with this being the third fire in a short period of time, according to Baker.

The weather was hot, dry, and windy, and visibility from smoke, blowing dust, and embers was low.

Pitt didn’t have radio communication with most of the individuals working on the fire. He and his team had virtually no training in wildfire response. In 1975, having formal wildfire training was uncommon.

Dow’s crew was laying hose out of the back of the truck in the mouth of a gully in the foothills northeast of Stockton when conditions began to change. The wind shifted and a sudden updraft blew the fire towards the men, causing them to not be able to drive out of the path of the fire.

James and Jones ran uphill away from the truck in an effort to outrun the flames but Jones tripped and fell into a depression, which saved his life as the fire blew over him, only burning him slightly, according to Baker.

James ran towards a ridge but part way up his clothing burst into flames.

Dow stayed in the truck where he reportedly inhaled the superheated air from the encroaching flame front burning through dry grass and sage.

A county fire truck stationed near the fire was completely destroyed but the brush truck the three men drove was scarcely damaged as the fire moved by so quickly.

After being taken to the hospital and then transferred to the University of Utah, Dow seemed okay. It  looked like he had a sunburn, except where his cowboy boots protected his feet, but inside, his lung tissue was burned and fluid filled his lungs. 27-year-old Dow passed away later that evening.

Dow was an excellent athlete and enjoyed wrestling, football, and basketball. Any competition was a reason for him to fight to win, according to Baker. He left behind a wife and two young sons.

After being taken to the hospital, James died two days later from severe burns that had caused a large release of protein into his circulatory system. He was 19 years old at the time of his death.

James was a practical joker who loved to laugh and make jokes, according to Baker.

He looked up to Dow and the other fire and police personnel he worked with. He was proud of his job working at the Police department as the animal control officer. Many individuals believed he did his job well and he looked forward to the future.

In 1986, a plaque was placed on the archway leading to the baseball field at the Dow James Park by the Tooele County Sheriff’s Office. The plaque is now reported to be in poor condition.

Tooele City Mayor Debbie Winn met with the Dow and James families to determine what a new memorial should look like. It was decided that the monument will have four sides, include a description of Dow and James, be over 70 inches tall, and more than 20 inches wide. It will also contain photos of the two men.

The monument will cost around $12,000, with additional costs for the foundation and improvements to the area, which is unknown at this time.

So far, half of the money has been raised from donations from citizens but the city is still in need of around $6,000.

Tooele City has already ordered the monument. They only needed 50% down to place their order. It will take approximately eight months to install, so that means it should be completed by spring 2023, if all goes according to plan.

“These two individuals gave the ultimate sacrifice and lost their lives in the service of protecting people and property in our community,” Baker said. “We feel it is important to honor them. This memorial will tell their story and everyone who visits the Dow James Park or Dow James Building will know why it was named in their memory.”

Those interested in donating towards the monument can call the Tooele City Finance Department at 435-843-2150 and make a donation over the phone, visit Tooele City Hall to make donations in person at 90 N. Main Street, mail a check to Tooele City Corporation at PO Box 89, Tooele, UT 84074 and indicate that the money is for the Dow James Memorial, or Venmo @TVFD-Association.

“We still need to raise more money for the project,” Tooele City Mayor Debbie Winn said at the recent annual Tooele City Fire Department banquet. “These two men gave their lives protecting people and property. They deserve the respect and recognition by our community.”