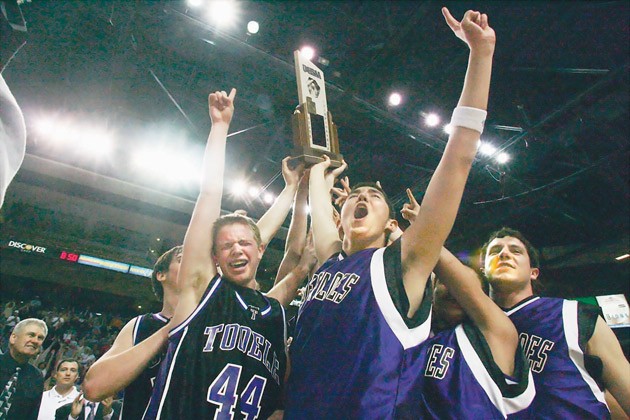 THS boys basketball teams have searched for nearly a century for the elusive state hoop title.

Even though former Buff squads have included a number of talented teams, as well as a vast array of individual hoop stars, for one reason or another they always came back to town without even advancing to the state finals — let alone bringing home the coveted crown.

The THS basketball program has felt a tremendous void of not hoisting a gold trophy and championship banner in the rafters at THS.

On Saturday the title quest finally ended and with the most unlikely cast of characters leading the charge. Tooele’s Cody Castle buried a 3-point bomb with 12.5 seconds on the clock, erasing a one-point deficit and providing the game-winning margin in a dramatic and thrilling 38-36 victory over two-time defending Class 3A champion Wasatch. The finals were hosted at the E Center in West Valley City.

The 2004-05 Buff squad, ranked by “the experts” as the team with the longest odds to win when the tournament began Thursday, brought home the championship that so many other purple and white teams failed to claim. After the final horn sounded at Saturday’s 3A championship game, a celebration began like no other this town has seen during a winter sports season. Astonishment and even bewilderment rippled through the nearcapacity crowd cheering for Tooele.

There were tears and cheers and everything else in between. Indeed, no emotion went unchecked.

Not too shabby for a team that many prognosticators picked to finish fifth in their own league, which would have put Tooele out of the running for a state berth. But that is why they play the games.

Not only did the Buffs complete the improbable, it was a storybook season with a made-for-Hollywood ending. They were a “TEAM of Destiny” as the Buffs proclaimed of themselves.

“I’m really emotional right now,” said junior player Nash Lockie. “We really worked hard in the off-season and really tried to get better every day and in every game. We knew we could do it as a team but not as individuals.

The biggest reason we won the title was that we did everything together and never quit on one another. When one player struggled, there was another teammate ready to pick him up.

We never wanted to let anyone on the team down. We played for one another and Coach (Gary Alverson).”

But things weren’t always so rosy for Tooele during the basketball season. In fact, Tooele picked up some thorns along the way, like a 43-point setback at Morgan Jan. 14 and a 16-point setback at Ben Lomond just five days later.

Still, Tooele didn’t panic. Not only did the Buffs stay the course, they buckled down and reeled off nine wins in the final 10 games to finish the season.

The team’s most defining moment, however, was not just one moment or one game. It was a week’s worth of “magic” that made the Buffs’ dreams come true.

Not just once but twice in a matter of three days, the determined Buffs rallied from six points down in the final minute to beat Ben Lomond at home. In an overtime Bear River game, Tooele claimed a victory to forge into a tie for second place with league rival Ben Lomond. And if that wasn’t enough, Tooele had the good fortune of winning the coin toss and ultimately the right to host a state playoff game where Tooele was nearly invincible all season.

“We were a little bit nervous during the state tournament run,” said Buff point guard Mike Holt, “but we knew we could do it if we all played as a team. All of the games were tight in state.

But we had been there before and had won those type of games against Ben Lomond and Bear River. Those wins gave us the confidence to win every game at state. This is just a great team.”

As for going out on top, a pair of seniors said they knew they could bring home a state title if they believed in one another.

And for one player, who many could call “Clutch Cody from the Corner,” this was just another big shot from a key senior on the team.

“I don’t know how I do it,” said Castle. “I guess I just like to live dangerously. Ever since the Ben Lomond game, everything seemed to build for us. And when they called the same play for me with the game on the line, I knew I couldn’t let my team down. When [the ball] left my hands it felt just like the Ben Lomond shot all over again. I just knew that shot was going to go in too. There is no better feeling than this one.”

Tooele Coach Gary Alverson said this title, his third as a head boys basketball coach, was the most rewarding and special — not only because it gave Tooele the elusive basketball crown, but also because of the journey and camaraderie shown by a team the not many expected to get to state — let alone with the whole darn thing.

“The kids really described this as a team of destiny, a Cinderella story, and a spiritual experience all wrapped up into one,” the coach noted. “This title ranks right up there because Tooele is my hometown and there are a number of people in Tooele I have special ties with like former coaches, players, friends, family. There was a lot of joyous celebration and a lot of weeping. It was a state title for the whole town and that made it extremely special and rewarding.

Alverson added, “This was a very special group of kids. I love them all. Of all of the teams I’ve coached, and I’ve coached a lot of them over the years, this team was the most unselfish, cacheable and had the best mentality of ‘we’re in it for the team and not for ourselves.’ And it showed. Their attitude had a lot to do with what we accomplished. They were a total team in every sense of the word and that is why we’re bringing home the trophy.”