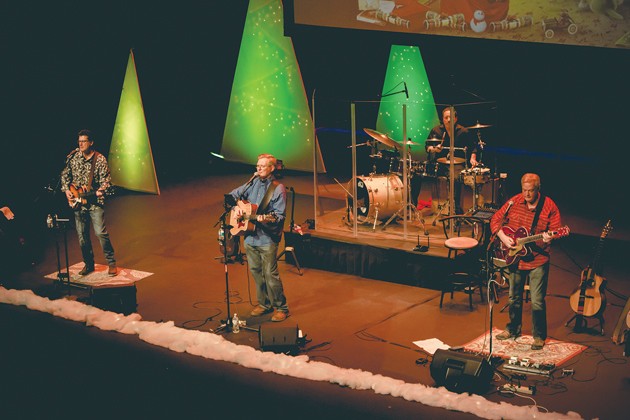 Joshua Creek will perform in a Christmas Concert at Tooele High School on Dec. 7. Tickets are available at Tooele City Hall and Library in exchange for canned food for the local food bank.

The Tooele City Arts Council will host their annual Christmas concert on Dec. 7 at the Tooele High auditorium.

“The council has been delivering a Christmas concert for over 15 years and many families have made these yearly concerts a holiday tradition,” said Holly Tippetts, arts council director. “The Arts Council’s mission is to promote and advance the arts in Tooele City and we are always trying to provide family friendly entertainment for the community.

The band “Joshua Creek” will be performing this year.

Since their assembly 16 years ago, Joshua Creek has released eight CD’s, received local and regional airplay throughout the United States, and performed in front of over a quarter of a million people.

Their song, “What Kinda Car” hit number one on the Christian-country charts in the south and their songs “Love You Son” and “Promise You’ll Stay” are often played on Sunday radio shows in the Rocky Mountain States.

In 2020, they released their newest album called “Redemption’s Road”.

The band’s backup singer Quint Randle said he would describe the band’s sound as “folk-rock-country-without-the-cowboy-hats”.

“Joshua Creek is known for their story songs and soaring vocals, and will be performing a collection of traditional and original Christmas songs that evening,” Tippetts said about the concert. “Joshua Creek is known for leaving audiences laughing and crying with their own brand of storytelling at venues ranging from the Dodger Stadium to Abravanel Hall, to the Tabernacle at Temple Square, and at our own Fridays on Vine summer concert series.”

Joshua Creek will be the only band performing during the concert at Tooele High.

The concert will be held at 7:00 p.m. in the high school’s auditorium.

The price of tickets is one canned food item and all of the food collected will be donated to the Tooele Community Resource Center Food Pantry to help provide holiday meals for members of the community.

Tickets can be purchased at the Tooele City Library and at City Hall.

“Joshua Creek is a fun band to listen to and I think the concert will be enjoyed by all ages. The music played that night will be a great way to kick off the holiday season,” Tippetts said.