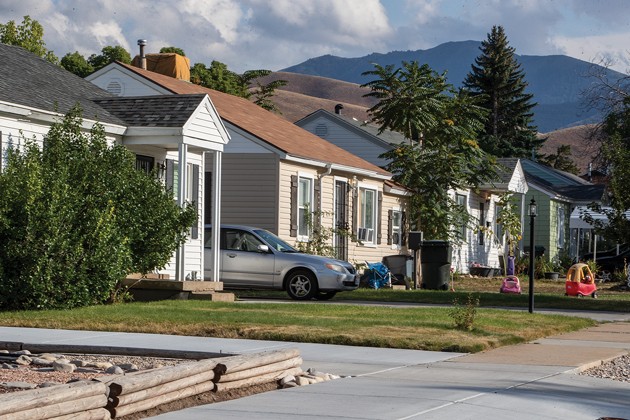 Homes line the street on 100 East in Tooele City.

Changes to the frontage width requirements to encourage development in the center of Tooele City received a positive recommendation from the planning commission during its meeting Wednesday night.

The proposed changes would reduce the required minimum lot frontage to 80 percent of the typical requirement for the zoning district in in-fill overlay Area A and 90% in Area B. The change would benefit historic residential lots which are non-conforming, according to Jim Bolser, the city’s community development director.

“Historically, in the core area of our community we have very long, narrow lots which present difficulties based on zoning classifications with subdividing them off,” Bolser said.

The in-fill overlay districts affect large swathes of the center of Tooele City, with the borders of Area A running between 600 North, 100 East, 400 South and 200 West. Area B encompasses to separate areas, with a westernmost border of Coleman Street and easternmost border of Seventh Street, ranging between 600 North and 900 South in one section and 600 North and Vine Street in the other.

Under the changes proposed by Bolser, the minimum in Area A, which encompasses downtown, would be reduced to 48 feet. The change would capture 93 percent of all properties under the current R1-7 zoning, easing the process for zoning the property in the in-fill overlay district.

The changes would reduce the minimum lot frontage width to 54 feet in Area B, which would capture more than 80 percent of the residentially zoned properties.

The positive recommendation forwarded by the planning commission was approved unanimously, on a motion from Commissioner Shauna Bevan, seconded by Commissioner Ray Smart.