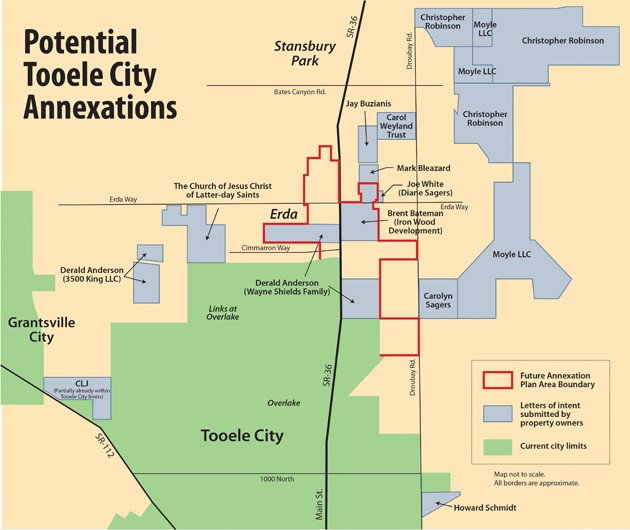 The Tooele City Council got a look at a map of a flurry of notices of intent to file a petition to annex into the city during their Aug. 19 meeting at Tooele City Hall.

The map included 15 parcels, some well outside of Tooele City limits.

The trigger for the rush of notices of intent was a change in state code, according to Tooele City Attorney Roger Baker.

“This all started with state legislative changes to annexation laws allowing a property owner subject to an imminent incorporation ballot to opt out of incorporation by filing a notice of intent to annex,” Baker said. “The notice had to be filed before the end of Aug. 5 of this year as that date approached we received a number of notices of intent.”

Baker described the parcels as “disjointed and fractured, spread out and not connected.”

Baker pointed out to the City Council that one parcel runs all the way out to Lake Point and up to the top of the Oquirrh Ridge.

Inclusion in an annexation area means the city can consider an annexation request within the plan area, but annexations also must be contiguous with the current city boundary.

An annexation petition may be submitted by a landowner, but it may only be annexed if the property is within the annexation plan area.

“Most of these parcels are quite some distance from Tooele City limits and are not also included in the annexation expansion area map,” Baker said. “They  can’t be annexed into the city without expanding the annexation map further.”

Prior to submitting a petition to annex, a property must submit a notice of intent to annex, according to state code.

A notice of intent consists of a letter and a map of the property, Baker said.

State code does not specify a time limit between the notice of intent and the filing of an annexation petition.

“Some of these land owners wanted to opt out of incorporation and this the way they could do it,” Baker said. “They simply want to opt out. That’s O.K. That’s what the law is.”

During the Legislature’s June 2020 fifth special session, they approved several changes to annexation law. Those changes included the addition of the Aug. 5 opt out date.

During the sixth special session held on Aug. 20, the state Legislature repealed language they added in June that allowed for annexation without filing an annexation petition and notifying a county of the annexation.

This was the language that caused what has been referred to as the Hideout City Council “Land Grab” in Summit County. Hideout’s annexation proposal was for Hideout, a Wasatch County town, to annex an area of land in Summit County.

The Legislature did not pass any legislation affecting the Aug. 5 opt out language during their Aug. 20 session.

Sponsors of the Erda incorporation petition are waiting to hear from the Lieutenant Governor’s office what affect the notices of intent of annexation filed with both Tooele and Grantsville cities will have on their incorporation process.