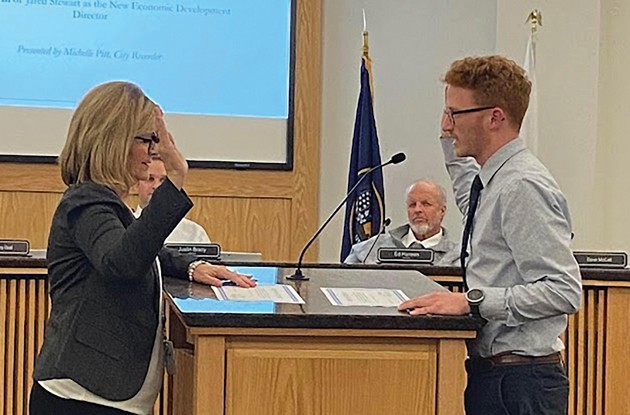 The Tooele City mayor and  council recently created an economic development department for the city.

Jared Stewart, who had been serving as the city’s economic development coordinator, was sworn in as the department’s first director.

“Now is the time we need to form an economic development department,” Winn told the City Council. “You all know what is happening development wise in our city and it is good. We are finally selling properties that have sat for many years, we are continuing to bring good businesses here that are providing jobs for residents, as well as being able to pay increased property taxes on otherwise vacant property. So, we are very excited to be able to form this department tonight.”

During the meeting, the Council approved the new department and appointed Stewart as the director of the department.

Winn explained that since his arrival, Stewart has written over $1.2 million in grants that have been funded to economically benefit the city.

“We have several million dollars of grants that haven’t been funded yet but we have high hopes that we will receive many more,” Winn also said.

“To say the least, Jared has exceeded the expectations we had of this position and it has grown into a director position, rather than just a coordinator,” Winn said.

“Jared is a professional. He is very competent in what he does and the direction he has taken us is impressive,” Tony Graff, councilman said.

“I am thrilled that Tooele City sees value in economic development and the work we have done together in the last year and a half,” Stewart said. “Economic development efforts are all with the vision to improve quality of life for Tooele residents. Growth of existing and new business helps create jobs, reduces the number of cars commuting to Salt Lake, and new investment through grants all contribute to improving the lives of residents and the success of business ventures.”

The city will hire one individual to help Stewart at this time. The department may grow in the future.

“This effort in tandem with Tooele City’s economic development department, will benefit our entire county and lead to many opportunities for collaboration,” Stewart said.