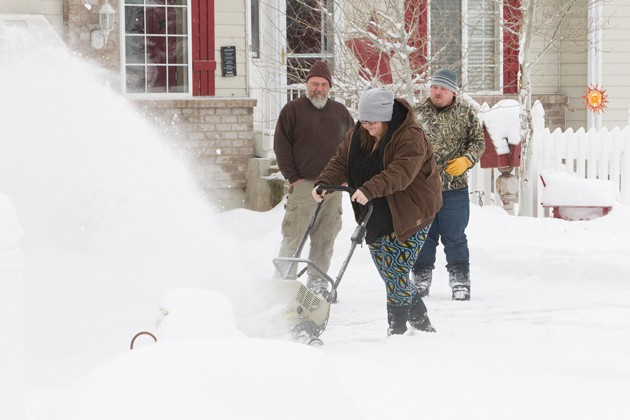 A group of residents help neighbors sclear the snow from their sidewalks and driveways during a Tooele County snow storm.

As the winter months approach Tooele City reminds residents that residential and business sidewalks must be cleared of snow, hail, ice, and sleet within 24 hours after a storm stops.

Sidewalk clearing is especially important in areas that are school walking routes, according to Tooele City.

Tooele City also reminds homeowners to not place or propel snow, hail, ice and sleet in roadway or other portions of sidewalks.

From Tooele City Code: “It is unlawful for any person to place or propel, or cause to be placed or propelled, snow, ice, hail, or sleet in the public way or in any manner which poses a hazard to vehicular or pedestrian traffic.”

Tooele City asks residents to please be courteous to your neighbors, do not blow leaves, snow or other debris into their yards. Residents should also remember to not park their vehicles on the street, or on the park strip or the sidewalk — they are also the right-of-way — when snow is falling or when snow or ice have accumulated.

Streets need to be clear of vehicles, basketball hoops, and other obstructions for plows to safely and efficiently clear the streets, according to Tooele City.

Trees should be trimmed to at least a 12 foot inches minimum so they do not obstruct or damage plows.

Also, as a reminder, if residents have a basketball hoop on the park strip, City officials ask that the hoop itself doesn’t hang over the street where it can get snagged on the snow plows. And semi-truck parking, per Tooele City Code, is limited to designated truck routes. Those designated routes are: Main Street. state Route 112, Tooele Boulevard —1100 West Street, Droubay Road, Pine Canyon Road, other streets as designated by express written permission of the police chief.

Tooele City residents may contact the city’s Ordinance Compliance Division with questions or concerns at 435-843-2164.