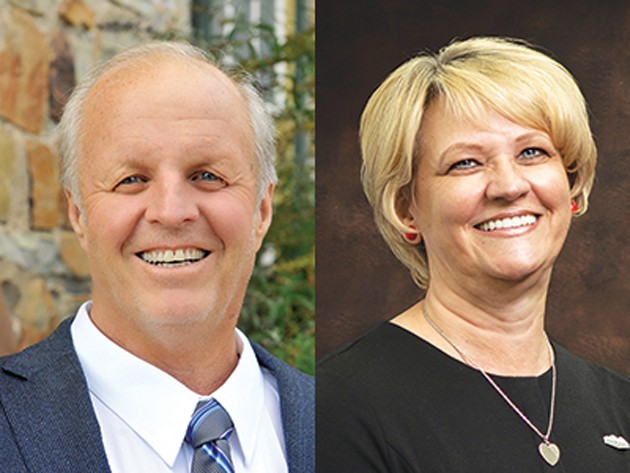 Tooele City hosted a meet the candidates night on the evening of Oct. 14, to allow those running for the positions of mayor and city council members to speak to the public about what they will do if they are elected.

Many promises were made that night.

The event began at 7 p.m. at Tooele City Hall in the City Council chambers.

Michelle Pitt, Tooele City recorder, began the night by welcoming those in attendance and explaining how to vote in the city election which will take place on Nov. 2.

When Pitt was through explaining how to vote, Debbie Winn, Tooele City Mayor was first up to speak.

Winn has been mayor of Tooele City for the last four years and she is running for re-election again this year.

Winn took to the podium to tell those in attendance and those viewing online a bit about herself.

“I am a leader who makes decisions based on sound facts, advice from staff members, and also the residents of this city,” she began. “I believe that people not only need to be heard, but we need to solve the problems they bring to us and address those concerns.”

Winn explained that she believed in managing growth and supporting growth through water and sewer systems.

She also believes in strengthening fire and police services and creating the new fire station.

During her four years as Mayor, Winn explained that she launched the #TakePrideTooele Campaign, helped initiate building a new police station, helped create a budget 101 book to better explain the Tooele City budget, helped with the Tooele City Master Plan, provided new equipment for the fire department, helped upgrade the water and sewer plant, helped bring a Church of Jesus Christ of Latter-Day Saints temple to Tooele, and more.

“It’s been an honor to serve as your mayor,” Winn said.

Ed Hansen, current city council member, running for mayor was up next.

Scott Wardle, current county council member, spoke for Hansen, because Hansen had laryngitis and could not speak.

Wardle read a statement that Hansen wrote for the event.

“I know I’m not much to look at and I don’t sound like your typical politician,” Wardle read. “My shirt doesn’t fit my neck and I walk slower than most, but please don’t let my looks deceive you. As I talk with you tonight, you’ll see why not being normal is the most important quality I bring to this office.”

Hansen, who is a long-time resident of Tooele City, wrote that he enjoys serving people.

Hansen is currently the vice chair of the City Council, helps homeless people, helped create the Life’s Worth Living Foundation, helped out with many city projects through the City Council, and is a small business owner of 41 years.

“My leadership style is to surround myself with good people-such as our staff and city council, gather all of the information we can from as many good sources as possible, create a plan together, and then get it done,” Wardle read.

Hansen believes in making the police and fire services strong to benefit residents of the city.

“Building and outfitting the [new fire] station will be one of my first priorities as mayor,” Wardle read.

Next, Matt Robinson, current planning commission member for 11 years, took to the stage to explain his platform in running for City Council.

Robinson said that he wants to focus on the future of the city, rather than the past.

“The future of Tooele City is bright,” he said. “I am excited to play a small part in it.”

“My vision for the future of Tooele City is a place where all the residents can, and want to live, work, play, shop, volunteer, and get involved locally without any need to go to that place that shall not be named around the mountain,” Robinson said. “That vision is possible.”

Robinson believes in well-planned and managed growth, fiscal responsibility and managing the city budget and the economy and maximizing funding for first responders. He wants to reallocate and reexamine city money and where it’s going, avoid tax increases, and become a proactive representative and help build community involvement and awareness, he said.

“I get things done way better than I speak publicly,” Robinson said in closing. “I want to make this city the best that it can possibly be.”

Manzione is running for election after being appointed to fill an vacated seat on the council. She has lived in Tooele City for many years.

Along with being on the city council, Manzione chairs a non-profit where she facilitates home stays for Japanese youth with Utah families, is a Utah PTA bylaw specialist, has served on the Board of Education.

“I am excited to run for re-election,” she said.

“I love Tooele City. I work hard, I am approachable, I am reasonable, I have long-term vision, and I have experience with a fresh set of views,” Manzione said. “I want to serve all the residents.”

McCall has lived in Tooele City since 1993.

“I love this place,” McCall said.

McCall has been involved in many projects throughout the city, including the Toys with Tots Program and was on the city council from 2008 to 2019.

McCall said he is approachable and easy to talk to.

“I don’t think there is anyone in here who knows me who doesn’t feel like they can’t approach me and tell me what their problems are,” McCall said.

McCall believes in serving members of the community, maintaining quality with inevitable growth, and affordable housing.

After McCall, Melodi Gochis took to the podium to address members of the community.

Gochis is currently the chairwoman of the city council and is running for re-election.

“I bring the experience, skills, and knowledge to hit the ground running,” she said. “I am a positive leader who understands the importance of cooperation and teamwork to achieve goals in government.”

Gochis is the chairwoman of the Tooele City Waters Special Services District. She also serves on the Tooele City Arts Council and has organized many arts-related events in the city.

“I’ve been a volunteer in this community for many years,” Gochis said.

She is also in favor of expanding the water reclamation system and making sure there is adequate water for citizens.

“I want you to know that I am committed to meeting the needs of our community and will continue to serve the citizens of Tooele,” Gochis said.

To find out more about the candidates, please visit tooelecity.org