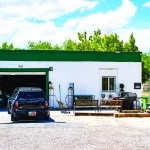 A homicide may have occurred on Garden Street in Tooele City, according to the Tooele City Police Department.

On Monday morning at 1:40 a.m., Tooele City police officers were dispatched to the area of Utah Avenue and Main Street.

Officers quickly responded to the call but did not find anything, so they cleared the call after searching the area, according to Jeremy Hansen, Tooele City Police Department’s public information officer.

Tuesday afternoon at 4:30 p.m officers responded to a psychiatric call at 363 N. Garden Street. During the call, officers spoke to several individuals in the area.

The psychiatric call and the call on Monday morning have led local officers to believe that a homicide may have occurred at the Garden Street residence.

Tooele City police officers have been on scene investigating since Tuesday afternoon when the second call came in, according Hansen.

The officers also called the state crime lab who are currently investigating the scene.

The state crime lab has collected enough evidence in the home to suggest that a homicide did occur, according to Hansen.

The Tooele City police are now looking for two individuals: Brandon Burr, 38 and Caitlyn Fluckiger, 26, who may have further information about the homicide.

Police believe the victim of the homicide is Devin Perryman, 24, a missing West Valley individual.

Tooele City police are instructing anyone with information related to the whereabouts of Burr, Fluckiger, or Perryman to call Detective Bree Dalton at 435-882-8900 or call the Tooele County Dispatch Center at 435-882-5600, option one. If you have any information please reference case number 5782.