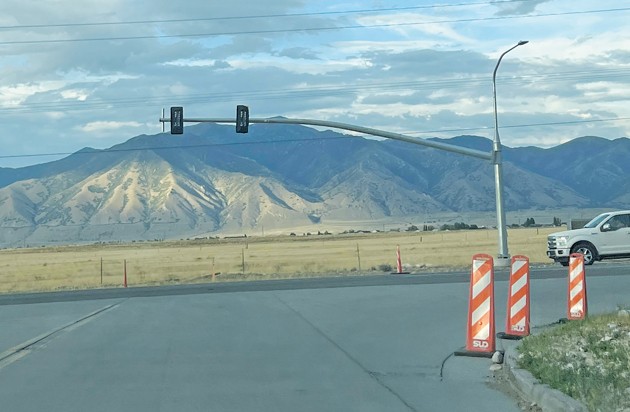 A new stop light will soon be unveiled by Tooele City at Utah Avenue and Lodestone Way.

Heavy truck traffic on part of West Utah Avenue has caused Tooele City to make some changes for safety’s sake.

The speed on Utah Avenue has been changed from 60 mph  to 45 mph between the railroad tracks and the traffic light at 1000 North.

Also, a new traffic light is being installed at Lodestone Way.

Although the contractors have put up part of the new traffic light, they are still waiting on parts to be able to finish the project, according to Shilo Baker, mayor’s assistant at Tooele City.

“I don’t have an estimated timeframe but we are hoping it will be soon,” she said.

The city has placed an electric message board on Utah Avenue to remind drivers of the new speed limit.

The light will be placed at Lodestone Way as a result of increased safety for traffic coming to and from the Industrial Depot.

“There is a lot of big truck traffic coming in and out of the Peterson Industrial Depot, so we encourage drivers to be cautious and safe,” Baker said. “Drivers should always be aware of their surroundings and pay attention to posted speed limits and follow them. We want everyone to be safe on the roads.”