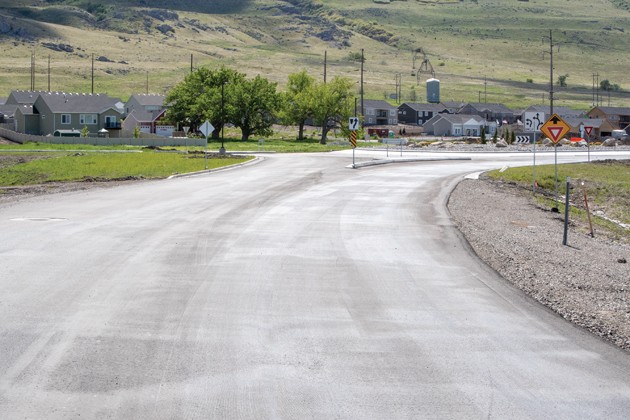 Saddleback Boulevard extension with roundabout on May 7, 2019.

After two months, the Tooele County Commission approved a Saddleback developer’s application to vacate a portion of Sunset Road in Lake Point.

The County Commission voted to vacate, or abandon the public claim to, the portion of Sunset Road between Cobblerock Road and Lakeshore Road in Lake Point during its meeting Tuesday night at the Tooele County Building.

But before approving the road vacation, the County Commission extracted an apology from the Saddleback developer, Chris Robinson, along with adding a requirement that he spend $10,000 on park equipment as approved by the Saddleback Homeowners Association.

The County Commission also included a year end deadline for Robinson to complete two community parks for their approval of the road vacation.

Robinson closed Sunset Road and opened an extension of Saddleback Road before getting county approval.

“I’m extremely apologetic for not following procedure and for whatever transgressions or sins I’ve committed in getting the cart ahead of the horse,” Robinson said. “I made a mistake in opening the road (Saddleback) last fall. I made a mistake in so doing. I should have just left it closed … I apologize that I put you in a position where I am trying your patience and my likability with you.”

During the same meeting, the planning commission also approved the preliminary and final plat for a Saddleback subdivision that included a road dedication for the new section of Saddleback Road.

Some Lake Point residents also said they didn’t want Sunset Road to be vacated because the road was part of the historic Lincoln Highway.

Despite their expressed frustration with being asked to approve a road vacation after the fact, planning commission members voted 5-1 to recommend that the County Commission approve the request to vacate the requested portion of Sunset Road during the March 6 meeting.

The County Commission considered the road vacation request at two previous meeting and each time it held the request for further discussion and review.

“I think Chris has comes to us pretty humble,” said County Commissioner Kendall Thomas during Tuesday night’s meeting. “I don’t see him pointing fingers at anybody but himself.”