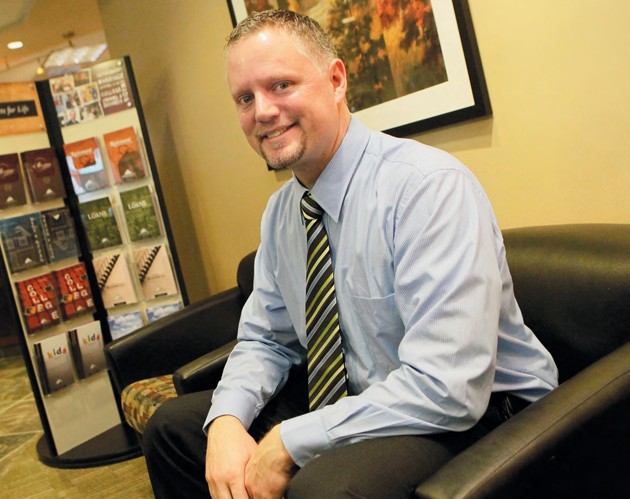 Kris King poses for a photo at Mountain America Credit Union Thursday morning. King has been appointed as the new leader for the Tooele County Chamber of Commerce.

The Tooele County Chamber of Commerce’s new chairman of the board plans to take the chamber into new territory. Kris King, who served as the chamber’s second vice chairman last year, will take over the helm of the chamber in 2013.

“The chamber has done really great with membership over the last year,” said King. “And I am excited about the opportunity to work with our new executive director and take the chamber to the next level.”

King has dreams of the chamber producing a monthly YouTube video highlighting a different Tooele County business each month.

King, branch manager of the Tooele Mountain America Credit Union, replaces Jed Winder, owner of Tooele Vision Center, who served as chairman of the chamber’s board of directors for 2012.

“It is all about working together to help make Tooele County better.”

The chamber can help portray a community where the city, county and businesses are united and work together, said King.

Although it is important for the chamber and local government to work together, the chamber can not forget that its primary purpose is advocating for businesses — a mission that may at times put it at odds with government.

“If we maintain a positive relationship with government, when those times come that we disagree we can sit down and discuss the issue together,” said King.

King’s first priority for the chamber will be to maintain its strong membership growth by stressing the benefits of being a member of the chamber.

“Strengthening local business is the purpose of the chamber,” said King. “And we have many benefits that members can take advantage of that help our local businesses.”

The benefits of chamber membership include networking at chamber meetings and events, submitting articles for the chamber’s newsletter, and a listing in the chamber’s resource directory, according to King.

King also plans to help build unity within the chamber and develop leadership skills among chamber members by conducting training sessions as part of board meetings to include strengthening skills in leadership, communications, and conflict resolution.

King plans to revive the Come Together campaign in partnership with government leaders. “I think Come Together is good idea,” said King. “We can kind of dust it off with some new ideas and get it back out there.”

King will be formally installed as the chairman of the chambers board of directors at an installation banquet on Feb. 2.

Along with King as chairman, the chamber will install Kathy Boltz from Heritage West Credit Union as first vice chairman, Chad Fullmer with the Tooele Denny’s Restaurant as second vice chairman, and Alison McCoy of Tooele Title Company as secretary- treasurer.

New board members Jake Johnson from JL Johnson C.P.A., Tye Hoffman with Edward Jones Investments in Tooele, and Sandy Critchlow with the Kiwanis Club of Tooele will also be installed at the banquet.