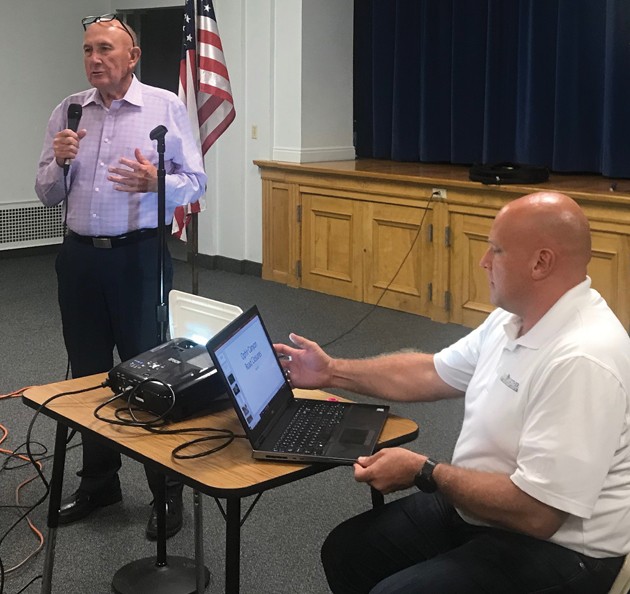 The Tooele County Commission discussed roads and all their varied uses and designations with 50 members and guests of the Sons of Utah Pioneers earlier this month.

Commissioner Thomas said when roads are closed, both owners’ property rights and the public’s right to use those roads are seriously considered.

“We protect both, but the County is committed to keeping public roads open that are designated ‘prescriptive use,’” he said.

The commissioners explained prescriptive use is a legal term designating roads that have been used by the public for 10 or more years, even though they cross private property.

“I don’t blame the Aults for being mad because of all the vandalism and litter on their property,” Commissioner Thomas said. “People go up there, drink beer, act stupid, and vandalize with absolutely no respective to people’s property.”

He noted, however, that because of prescriptive use, the Serviceberry Road is public.  “Unfortunately, this matter is headed to court,” he said.

The commissioner also discussed progress being made on other road projects that primarily impact commuter travel between Tooele and Salt Lake valleys.

Both commissioners said slow, but steady progress continues to be made on the Exit 99 overpass.

A significant part of the slow construction is because of the “charging” process, which includes the time it takes for fill dirt to settle before asphalt is laid.

Commissioner Thomas explained that the surface sank about six feet over time after contractors placed fill dirt for the overpass.

Commissioner Milne told Sons of Utah Pioneer members that UDOT recently awarded the contract for the first leg of the long-discussed Mid-Valley Highway.

It will be constructed from Interstate 80 at about milepost 94 south to Sheep Lane, just east of Grantsville City.

Construction begins in late 2019 and is expected to be complete in the spring of 2022.

Commissioners said the 4.5-mile road costs about $80 million, with $50 million designated for interchange and off-ramp costs.

When complete, about 20% of the commuters from Granstville, west Tooele and parts of Erda and Stansbury Park are expected to use Sheep Lane. This will help ease early morning and late afternoon commuter traffic at state Route 36 and Exit 99.

Work on the third southbound lane from exit 99 to Sunset Road in Lake Point is nearly complete and will help improve safety for vehicles using the business located on the west of SR-36.

Commissioners also provided updates on the early September fire in the mountains east of Lake Point and the challenges the county continues to face with consistent, rapid residential growth.

The Settlement Canyon Chapter of the Sons of Utah Pioneers meets monthly on the first Thursday at the Tooele 4th Ward building, located at 200 W. 200 South in Tooele.