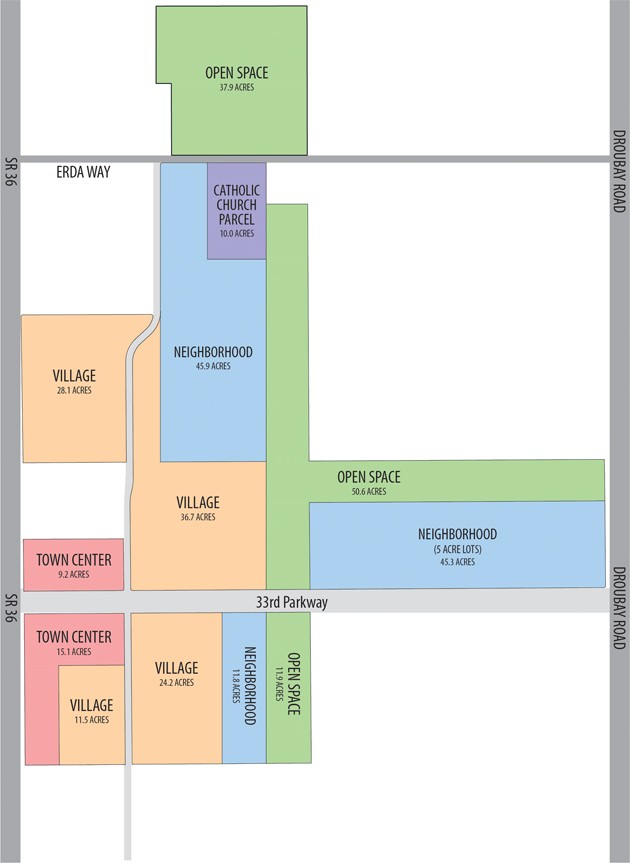 The Tooele County Council approved a rezone request for nine parcels in Erda totaling approximately 360 acres, even though Erda will most likely become its own city before the end of the year.

The Tooele County Council voted 3-1, with one abstention, during their Oct. 19 meeting to approve a rezone from RR-5 —rural residential with a 5-acre minimum lot size — and C-G — commercial general — to the planned community zone for property between state Route 36 and Droubay Road from north of Erda Way to south of the future 33rd Parkway.

The planned community is to be known as Oquirrh Point, according to the rezone application.

Before the vote on the rezone, Colosimo reviewed the plans for Oquirrh Point and contrasted those plans with a proposal that has been developed for the property that could be pursued under current zoning if the rezone is rejected.

The Oquirrh Point development would put 1,260 residences on the 360 acres for an average density of 3.5 residences per acre.

The Oquirrh Point residences would be owner occupied with 90 acres of open space including 60 acres of agriculture preservation. Oquirrh Point would have 126 units of moderate income housing. The developer would assume the county’s obligations to pay for 50% of the 33rd parkway and to pay for an intersection at SR-36 and 33rd parkway.

The alternate plan, known as KTM Suites and EC Villas West, under existing zoning, would put 1,100 rental residential units on 70 acres for an average density of 14 units per acre.

There would be no open space, no agricultural preservation, no moderate income housing, and no school site donation. The developer would not pick up the county’s portion of the 33rd Parkway or pay for the intersection at SR-36 and the 33rd Parkway.

However, several Erda residents took advantage of the public comment period at the beginning of the Oct. 19 County Council meeting to voice their opposition to the County Council approving the rezone.

Kathleen Mallis, Erda, said Erda residents had already rejected higher density development in this area when they rejected the Shoshone Development that was planned for this area with a referendum and a negative vote.

“Allow Erda City to make the decision on this,” she said. “Erda residents are hoping to keep the area more rural. … Pass the decision to Erda City. …  Let Erda City evaluate if they want this development.”

Keith Toone, a candidate for Erda City Council, said, “It is time for Erda City to become a city. Do not impose rules and regulations that we will have to make changes to or work around. Let us make our own decisions.”

“This greatly affects people in my district,” he said. “It’s in their backyard. Erda voted to become its own city. … Pushing this through is wrong.”

Larry Hatfield, another candidate for Erda City Council, encouraged the County Council not to vote on the rezone.

“It’s a matter of weeks before Erda becomes a city,” said Erda City Council candidate Terry Miner. “Hold off. Let the people of Erda decide. Otherwise you are writing checks that the  city of Erda has to cash.”

Alison Kipp, Erda resident, reminded the County Council that a development with lower density on the property in question was voted down by voters.

“Erda incorporated so we can control our own land use decisions,” she said.

“This is a property right issue of a government that has the law today and therefore that applicant has the right to be heard today,” he said.

Councilmember Jared Hamner said he agreed that the applicant had the right to be heard.

“And we need to consider what is in the best interest of the county,” he said.

Council chairman Tom Tripp was concerned with the impact that this development would have on the nascent government of Erda City.

“It puts the citizens of Erda at a disadvantage,” he said. “I don’t support it at this time. It would trample on the people of Erda. It will be a distraction … to deal with a development that will increase the size of their city by a third … It shouldn’t be the first thing they have to deal with.”

Tripp also said he was uncomfortable with the phone call he received from the applicant with the new proposal. He said it felt like “extortion.”

Kendall Thomas said while he ordinarily would leave a development of this size up to the future Erda City, the size of the alternate plan — 1,100 units that could start being built next week — gave him reason to think further.

“Oquirrh Point has lots of good stuff in it,” he said. “I like the donation to the school district, paying for 33rd Parkway pay and paying for the intersection. It’s balanced out with 5-acre lots around 5-acre lots. It goes a long way towards responsibility, but it’s not perfect.”

The County Council voted 3-1 to approve the rezone. Wardle, Tripp and Hamner voted for the rezone. Tripp opposed. Councilmember Tye Hoffmann abstained from voting due to a conflict of interest.