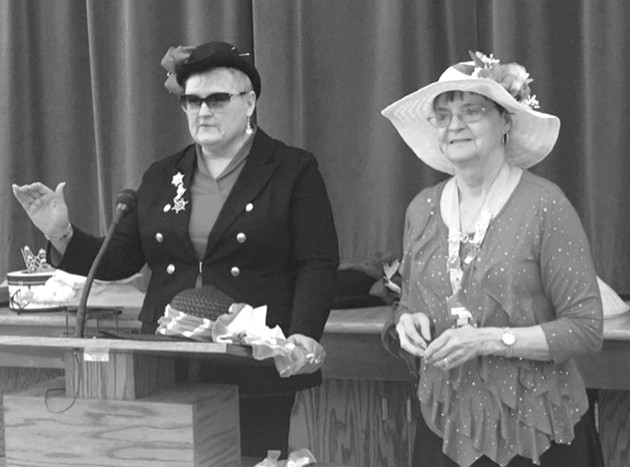 The theme was pioneer hats and shawls. Valynn Carter brought 200 hats that she displayed for the enjoyment of the attendees. She told the history of several of her hats and how she acquired them.

One hat belonged to her little brother who is now deceased. Another, of oriental design, was worn during the Chinese New Year.

Prizes were given to attendees: Most colorful hats to Karen Evans, most elegant to Barbara Manzione, most exotic to Kathy Johnson, most oldest to Carol Cluff, and outlandish to Glenda Murray.

Carter brought two hats she had handmade and gave them away in a drawing. Shawls made by Marilyn Christiansen were given as prizes.

Judy Schneider, president of the Tooele Company, gave a brief history of shawls. She also told the story of Sarah Frank, a member of Martin Handcart Company, and her fiance, George Padley, who died from exposure and hunger. Frank had insisted Padley be wrapped in her shawl and hung from trees until they could come back when it was warmer and dig a grave to bury him.

There is a shawl in the DUP Museum on Vine Street that was wrapped around a pioneer’s little niece and then given to her sister to care for the child on the trip west by her mother who prayed that her baby daughter would always know that she loved her.

The mother couldn’t come but stayed in England, while sending her sister with her baby to a better life in America.