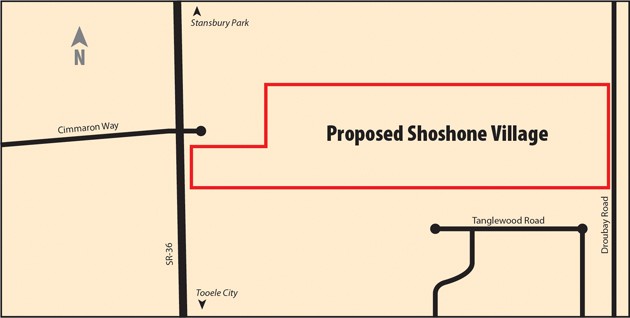 A vote against Prop. #1 will overturn zone change approved in 2018 for Erda subdivision ♦

Two local propositions will be found at the end of the Nov. 3 general election ballot in Tooele County.

The first proposition, or Prop #1, is a referendum on the zone change for a proposed subdivision in Erda.

The concept plan for Shoshone Village showed a 9.5-acre buffer zone of open space on the south and east end of the property with 16-acres of 1-acre lots backing up to the buffer zone. The remaining 65 acres would have a range of lots sizes, but overall the entire project would not have a density greater than three residences per acre, according to the plan.

However, a group of Tooele County citizens gathered enough signatures on a petition to place the rezone decision on the Nov. 3, 2020 ballot.

Wendy Sasser, an Erda resident and one of the sponsors of the referendum, wrote the argument against approval of Prop #1.

“Proposition 1 will change zoning in a primarily agricultural area from RR-5 — rural residential single family with five-acre minimum lot size — to R-1-12 — residential single family with 10,000 to 22,000 square foot lot sizes with up to three dwelling units per acre. In the proposed development, this zoning change would constitute approximately a 700% increase in average density which is eight times what is allowed in the original RR-5 zoning designation,” wrote Sasser.

Butterfield counters that all legal requirements were followed. He also asserts that the project owners will participate with Tooele County in the construction of a new road to connect Droubay Road with SR-36 as well as pay for other roads and open space amenities.

Shoshone Village’s approved design will provide a mixture of open space and large residential lots to provide buffer space, according to Butterfield.

Sasser argues that Shoshone Village’s density is not in harmony with the surrounding area.

She points out that  Shoshone Village if developed as its original RR-5 designation would only have 22 residences and not the proposed 174.

Sasser also points out that Droubay Farms, a 5th generation large-acreage production farm, borders the Prop 1 parcels to the north.

“Urban style development does not belong in a rural setting and next to an active farm. Neighborhoods should be cohesive communities,” writes Sasser.

Sasser also expresses concern that the roads are not adequate  for the traffic.

The complete arguments for and against Prop #1 may be read on the Tooele County Clerk’s website at tooeleco.org. Select “Elections and Information” from the menu on the left sid eof the clerk’s home screen. Then select “Election Information” and scroll down to the “Arguments” menu.