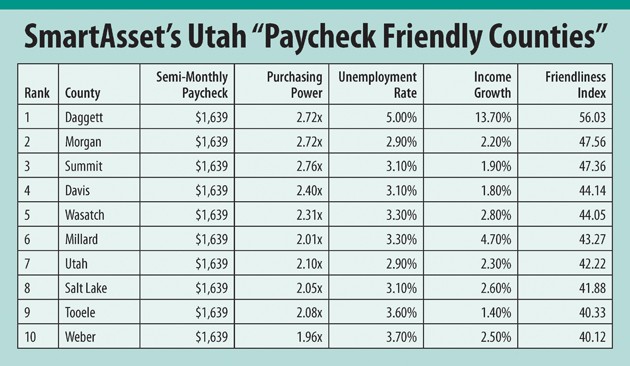 The county was rated the ninth most paycheck friendly county out of Utah’s 29 counties in a research study completed by Smartasset, a New York City-based financial services company.

The study computed a paycheck friendliness index score for all counties with 100 being the highest possible score.

Tooele County received a score of 40.33. The top score in Utah was Daggett County with a score of 56.03.

The most paycheck friendly county in the nation was Loving County, Texas, with a score of 100, according to Smartasset’s study.

The aim of the study was to find places in the country with favorable economic conditions where citizens get to keep more of the money they make.

Smartasset then created a purchasing power index for each county. This reflected the ratio of household income to cost of living.

For income growth, Smartasset calculated the annual growth in median income over five years for each county and indexed the results.

Lastly, it calculated the weighted average of the indices to yield an overall paycheck friendliness score. Smartasset used a one-half weighting for semi-monthly paycheck and a one-sixth weighting each for purchasing power, unemployment rate and income growth.

Smartasset also created an unemployment rate index that shows the counties with the lowest unemployment.