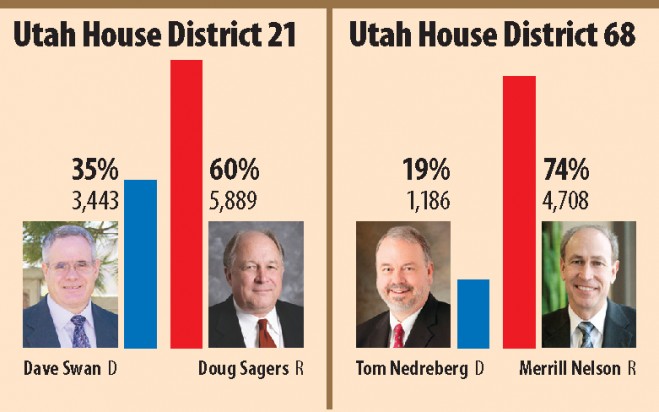 For the first time in 30 years, when the state Legislature convenes in January there will be two people from Tooele County sitting in the House of Representatives.

Nelson pulled down a commanding 74 percent of the votes in House District 68, which stretches south from Grantsville to include parts of Juab, Beaver and Utah counties, along with all of Millard County. He managed to carry four of the five counties, losing only in Juab County to his Democratic opponent Tom Nedreberg, who serves on the Eureka City Council.

For Swan, it was a second defeat for public office after he unsuccessfully ran in 1994 for Salt Lake County Assessor before moving home to Tooele.

“I campaigned hard and gave it my all,” said Swan. “I won’t rule out another run for office at this time.”

Swan admits that he initially did not plan to run for office this year because he knew that Utah Republicans would turn out in droves to support Mitt Romney’s presidential bid.

Two years ago, Sagers defeated 18-year Democratic incumbent Jim Gowans with 52 percent of the vote to win his first term in the House.

“I feel honored and humbled by my win,” said Sagers. “I have always looked on politics as public service. We have some tough decision ahead for the state. With the federal government facing sequestration of funds, it will mean cutbacks in federal funds to the state.”

Nelson, who served in the Legislature from 1991-92 is looking forward to returning.

“I plan on representing the entire district,” said Nelson. “I campaigned in every county, but it is an historic occasion to have two people from Tooele County seated in the House.”

Romney’s defeat in the race for president means the Legislature will have step up and take the lead in restoring sound principles of government, Nelson said.

“Romney’s defeat means Utah will have to lead the way and show the country how to get back to the original principles of the Constitution and restore individual freedom and responsibility,” Nelson said.

House Republicans will gather on Thursday to elect leadership for the House. Both Sagers and Nelson anticipate that Rep. Rebecca Lockhart, R-Provo, will be re-elected to a second term as speaker even though Rep. Mike Noel, R-Kanab, has announced intentions to challenge Lockhart for the post.

“We are reorganized and revitalized,” said O’Donnell. “We fielded some very good candidates with good backgrounds to run for office this year. We will be back in two more years with more candidates and we will be bigger and stronger.”