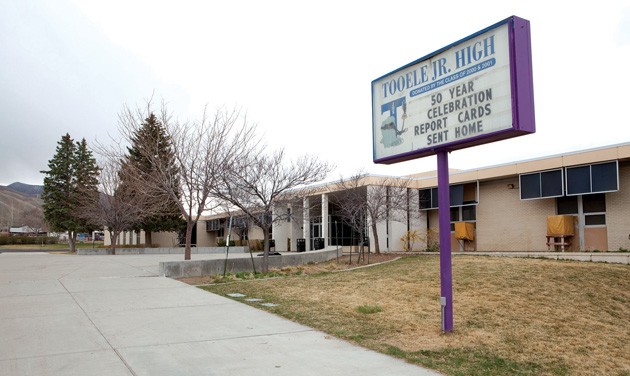 Tooele Junior High school, built in 1964., has unreinforced masonry walls that may be subject to collapse during an earthquake. A security and safety study completed for Tooele County School District estimated the cost of safety upgrades for the school to be $13.2 million.

The Tooele County School District heard a plan to improve school safety and security with a $24.3 million price tag during their Jan. 19 meeting.

In March 2020 the school board advertised a request for proposals for a security and safety consultant. R.L. Nichols & Associates, a Georgia-based firm with a specialty in youth and school security, partnered with the Salt Lake City-based architectural firm MHTN and was selected by the school district as their consultant.

Les Nichols and a team from MHTN spent two weeks in June visiting each school and meeting with district staff and principals.

Their report included existing strategies that they recommend that the school district should continue and recommended new actions, with estimated costs, for additional steps to maintain security and safety in schools.

The report included both suggested district-wide policies and practices and a school-by-school list of strategies.

The school-break out of costs totaled $24.3 million in costs, however Nichols explained that list included two school-specific high price items.

“About $12 million, or nearly half of that cost, is related to school safety at Tooele Junior High School, due the school being built with unreinforced masonry,” Nichols said.

The report also included $8.8 million for Stansbury Park Elementary School. The majority of that cost is for relocating the office to be near the front door, according to Nichols.

One of the most significant projects that should be a top priority is $7 million for access control in buildings, he said.

Access control includes creating a safe vestibule area where visitors can wait until their identity and background can be checked before they receive an identification badge and are allowed access to the building.

Most new school buildings have this feature and the district has retrofitted some buildings, such as Grantsville Junior High School, with this feature.

Nichols also recommended card readers for exterior doors so staff can have easy access to re-enter the building after taking a class outside. This will prevent the need for the practice of blocking doors open while outside, he said.

CPTED recommendations included changes in landscaping to avoid trespassing and interference with cameras and lighting.

Effective and uniform signage, fencing, and gates on schools to establish entries, exits and establish clear expectations was also included as part of CPTED.

Another $1 million was allocated for updating video surveillance of school property.

The safety and security report was part of the school board’s information and discussion agenda for Jan. 19, no formal action was taken. The board and district staff will review the report and refer to its recommendations as they work on school security and safety.