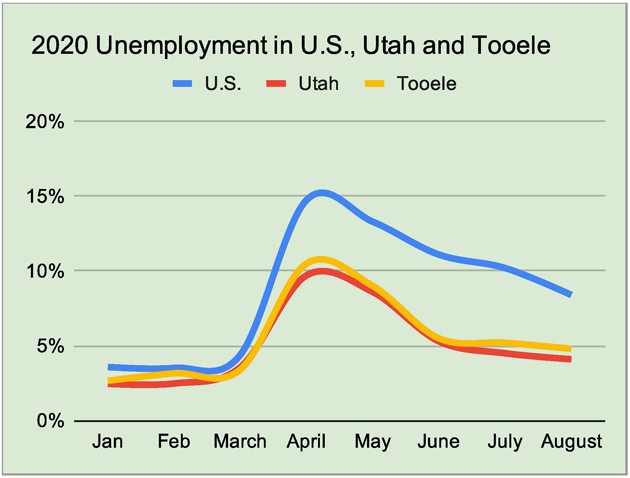 Tooele County’s unemployment rate dropped to 4.8% in August, the fourth consecutive decrease since jumping to 10.5% in April 2020 as the COVID-19 pandemic caused a record one month climb in unemployment, according to the Department of Workforce Services’ August unemployment report.

While the County’s August unemployment rate is less than one-half of the April peak arte, unemployment in Tooele County in August 2019 was 2.7%.

The largest decrease in jobs for the Salt Lake Metropolitan Service Area, which includes Salt and Tooele Counties, was in the  Leisure and Hospitality sector at 18.6% for a loss of 12,100 jobs.

The largest job increase in the Salt Lake MSA was in the Natural Resources, Mining and Construction sector with a 5% increase for 2,400 new jobs.

“Utah’s economy continues along its path of improvement” reported Mark Knold, chief economist at the Department of Workforce Services. “The unemployment rate dropped again and remains one of the nation’s lowest. While the overall pace of job re-engagement is unchanged from July, there was an underlying employment improvement in the private sector, which is the Utah economy’s foundational and market-driven component. It speaks to the energy and prospects within the Utah economy.”