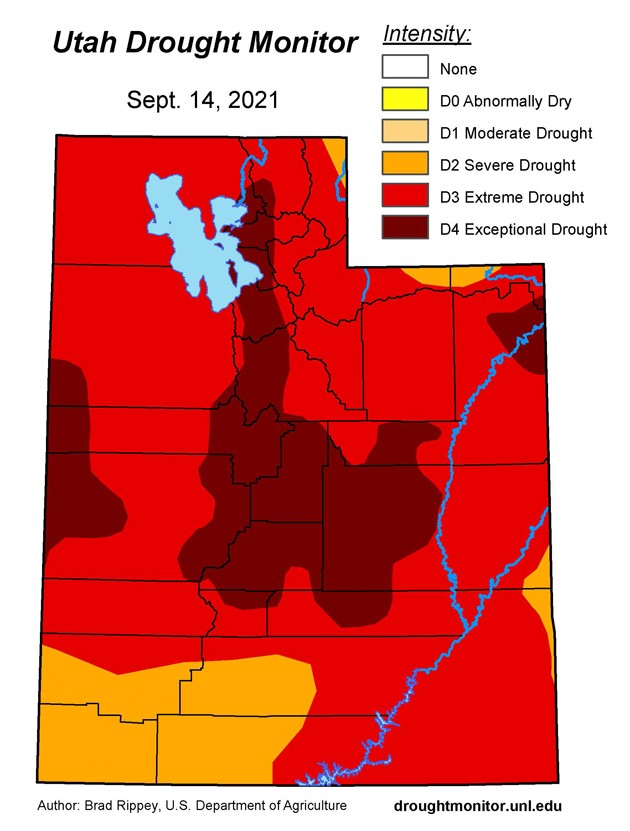 While drought is still affecting most of Utah and Tooele County, as the meteorological end of summer approaches things are getting a little better.

About 88% of the state is still in “extreme” or “exceptional” drought, as categorized by the U.S. Drought Monitor.

However, part of Utah— including  most of Tooele County, except the southwest tip — was downgraded from “exceptional” to “extreme.”

Exceptional drought is the highest category of drought in the U.S. Drought Monitor’s rating system. It is defined as an area experiencing exceptional and widespread crop and pasture losses, fire risk, and water shortages that result in water emergencies.

Extreme drought is defined as an area where major crop and pasture losses are common, fire risk is extreme, and widespread water shortages can be expected requiring restrictions.

Shorter days and cooler nights have reduced evaporative demand, which means we aren’t losing as much water to the air. As a result, outdoor watering can be reduced, according to the Utah Department of Natural Resources.

Director Brian Steed. “We appreciate those who have used less water this season. Being mindful of water use is essential to stretch the limited supply.”

Hauling. Due to limited water and forage, livestock are being moved from pasture earlier than

average across the state, according to the DNR.

The National Weather Service’s 7-day precipitation forecast from the Plains to the West Coast predicts mainly dry conditions will prevail with the exception of areas of isolated, light precipitation possible across the Central and Southern Rockies and the northern Great Basin, while slightly greater accumulations, generally around 1 inch, are expected in the Northern Rockies.