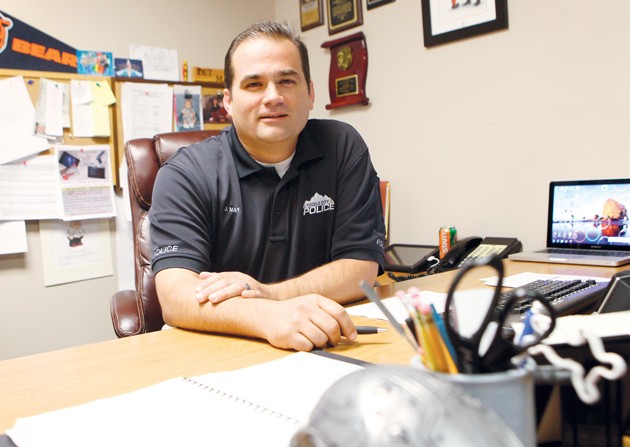 Det. James May of the Tooele City Police at his desk Tuesday morning. The Utah Chiefs of Police Association honored May with the award for most outstanding officer.

Utah police chiefs honor James May who says, ‘this is the place I’ve always wanted to work’ ♦

Hard work, good experience and a solid team effort are what a local detective credits for his recent top honor by a state law enforcement organization.

Tooele City Police Det. James May was named the “2013 Outstanding Officer of the Year” for a mid-sized police department by the Utah Chiefs of Police Association on March 27.

The award is voted upon by the eight-member board of the association, said Frank Budd, executive director for the association. He noted the award is not presented if the board doesn’t feel any of the candidates are worthy.

“He was clearly an outstanding officer. All of the accomplishments, and he’s recognized as an expert in the field of forensics,” said Budd “In fact, accompanying his recommendation, we had two other agencies he’d helped with homicide investigations also gave their recommendations. That went a long ways.”

However, May remains modest about the distinguished state honor.

“They were awards for me, but you have to have a team,” he said. “I think [the award] reflects on the department.

“I think I’ve got a good team. I have good support from the department and from family, as well.”

Born and raised in Tooele, May, 41, said his ambition was always to settle down and fight crime in his hometown.

“I’ve pretty much always known this is what I wanted to do,” he said. “This is the place I’ve always wanted to work. It’s just something I feel going through the steps I did prepared me to come here.”

After getting his police certification in 1993, May started with the Sandy Police Department, where he worked as an officer and ran the evidence room. Later, he and a fellow officer created the department’s forensic unit.

Despite the relative population difference between Sandy, West Valley and Tooele, May said he found the transition from the Salt Lake Valley to Tooele County to be seamless.

“A lot of people think we’re not as busy as other agencies,” he said. “We’re just as busy as those other departments; they just have more officers to spread the calls between.”

May currently serves as a member of the department’s SWAT team and Tooele Drug and Gang Task Force, as well as being the department’s representative on the Utah Attorney General’s Internet Crimes Against Children (ICAC) Task Force.

He is also a current board member and past president of the Utah Forensic Divers Association, and contributed to the standardized  death investigation form and training manual used by the Sudden Unexplained Infant Death Investigations National Training Academy.

May also keeps his forensic training and certification current, he said, so he can share that knowledge with other officers in the department and county. This includes an annual training session he teaches to all local interested officers. The training helps keep area officers up-to-date with forensic technology and techniques, May said.

“It’s good I can bring that out here so we can keep up with technology and trends,” he said. “It brings the technology. It brings the means and the way the world is solving crimes here.”

“I’ve not seen too many officers that did so many different varying things to contribute to law enforcement on such a broad scale, said Kirby. “A lot of officers do a lot of different things within the community, but he’s contributed state-wide to better law enforcement. He’s always so cheerful and positive about his work. I don’t know how someone who does the child sex abuse cases that he does stays so positive.”

May said his work with ICAC, which he has done for more than two years, can be difficult, but it helps to focus on the task at hand and on the victims he is trying to help.

“You’re dealing with children that are being photographed or videotaped, so it’s more difficult than a normal case would be, because it’s not normal. It’s different from a burglary or something, taking pictures of kids,” he said. “You have to realize that you’ve got to treat it like every other case and you’re there for the victims and there to help the victims and hopefully find out who’s doing this. All of these victims are helpless and you have to try to find out what happened. That’s kind of the mindset you have to have.”

Although most of the child pornography May investigates through ICAC is fairly remote, a case last fall, where a Stansbury Park man allegedly created child pornography of two young girls, brought his work a little closer to home, he said.

Working on the training manual for unexplained infant deaths also hit close to home for May, who lost a 4-month-old son to SIDS. Following that loss, May said, he did a lot of research into unexplained infant deaths. This prepared and qualified him for when the Center for Disease Control asked him to help write guidelines for an investigative standard on sudden infant death cases with other law enforcement officers, social workers, medical examiners, doctors and parents.

“Between all of us, we came up with guidelines, a questionaire where an investigator can go in with this basic form and ask the parents or babysitters or anybody involved,” he said. “Once that was done, they brought some people back to write the manual on how to investigate that, and once that was finished, they brought back more select people, and I was one of them, to be a trainer.”

May’s work as a trainer was essentially to train other trainers. Five-person teams from each state, typically consisting of a medical examiner or coroner, law enforcement officer, social worker, death investigator and college professor, would get trained and then return to their home state to train others.

In addition to U.S. investigators getting onboard with the standard, 16 people from England and Australia were sent over to take the training, he said.

That standard is in use today, May said. Recently, he noticed the guidelines on the desk of a former colleague from the Sandy Police Department. Finding that work he contributed to help other investigators locally and abroad is gratifying.

“We know it’s being used and we’ve gotten some good feedback from it,” he said.

May’s efforts have had long-lasting effects on an individual scale, too. As May was given his award at the association’s banquet in St. George, a family and victim of one of the cases he helped investigate was in the audience. The girl had been shaken as a baby by her baby-sitter in 2007, but survived.

May said the family keeps in touch and he sees them about once a year, but their presence in St. George was a surprise. Seeing the fruits of investigations like that, he said, is a rewarding experience.

With that case, and in many others, May is quick to point out that he didn’t work alone. He credits other officers and detectives with doing much of the work. With teamwork like that, he said, it’s easy to get engaged in the work.

“There’s a lot of support, from administration on down. We’ve got a good crew. We’ve got a good department,” he said. “It’s one thing when you like going to work. It makes it nice. Not everyone can say that, right?”