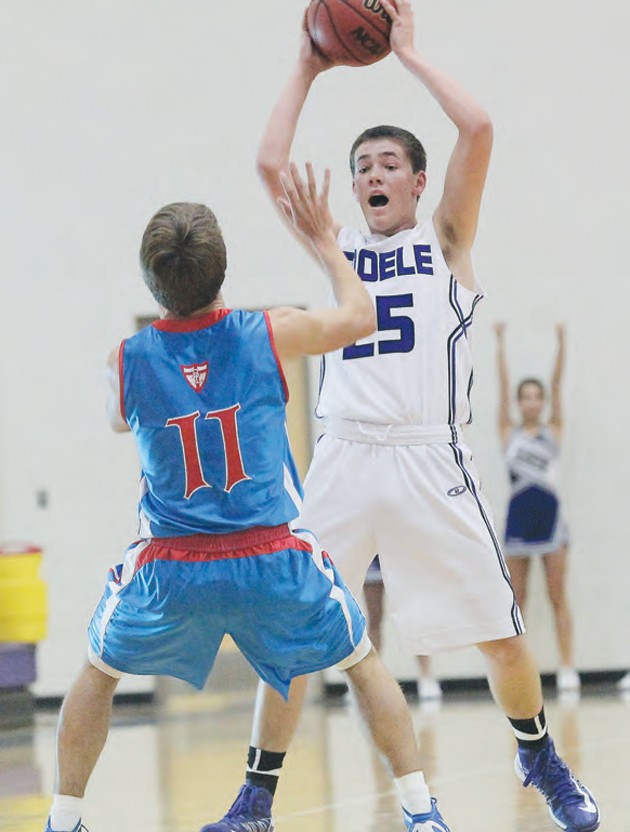 After a tight first quarter, Ben Lomond pulled away in the second quarter and Tooele could never catch up as the Scots defeated the Buffaloes 62-47 Wednesday night in the Tooele gym.

Tooele trailed 15-13 after the opening quarter when the Scots took control with a 6-point run in the first two minutes of the second quarter. Ben Lomond maintained an 8-point advantage for most of the second quarter until Tooele’s Tyler Woodruff connected on an inside jumper to slice the lead to 24-18.  Ben Lomond, however, grabbed its biggest lead just before halftime when Corbin Medina swished a 3-point shot from the corner to make it 27-18 at intermission.

The Buffaloes could not cut into the Scots’ lead which expanded to 40-26 with 47 seconds left in the third quarter.

Hustle in the final 30 seconds led to a pair of baskets for the Buffaloes. Woodruff scored on a crisp pass from Matt Memmott, and the the Buffaloes stole the ball and pushed it to Woodruff who missed a hurried shot. But Tyler Lawrence followed the miss with a layup to keep Tooele within striking distance down 40-30 after three quarters.

Pollmann started to cause havoc for Ben Lomond point guard Sterling Brandley in the opening minutes of the fourth quarter. Pollmann was swiping the ball, but also drawing the attention of the officials. After a steal, Pollmann was whistled for his fourth foul wth 5:58 left in the game and had to sit.

Midway through the final quarter, the Buffaloes were called for an intentional foul. Ben Lomond capitalized with two made free throws plus an inside basket to grab its biggest lead of the game at 46-31.

Ben Lomond seemed to put the game on ice with a 3-pointer with just under 4 minutes left in the contest to swell the margin to 49-31.

The Buffaloes still were able to make a run at the Scots with full-court pressure defense and a pair of baskets from long range. Down 51-37, Pollmann connected on a triple and 15 seconds later Memmott buried a 3-pointer and suddenly the Buffs were within 12. Tooele narrowed the score to 56-45 with 1:31 remaining, but that’s as close as they could get.

The uptempo defensive effort worked for awhile for the Buffaloes,  but in the end Ben Lomond was able to capitalize and score some easy field goals and hit foul shots to win by 15.

Tooele coach Shawn Faux said the full-court pressure defense was affective for a short time late in the game, but took a lot out of the players physically.

“It [full-court tight defense] can work for awhile, but when you’re down double digits it just takes too much out of you and we aren’t deep enough to keep it going,” the coach said.

“They [Ben Lomond] took us out of our game both on offense and defense and a lot of it has to do with our mental toughness. We aren’t as mentally tough as we need to be,” Faux said.

Tooele plays at Grantsville on Friday.