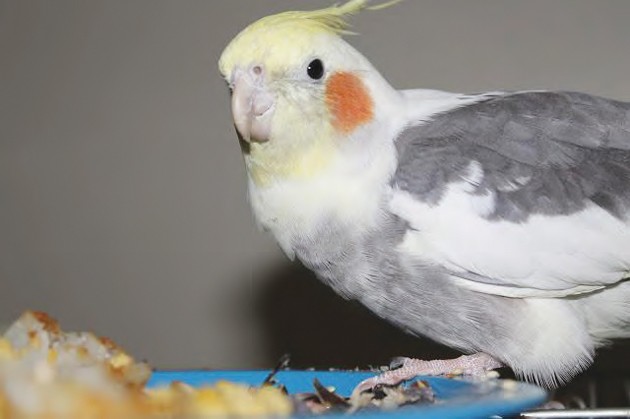 Sammy, a cockatiel belonging to the Logan family, sits in his cage. The cockatiel escaped the Logan house on Christmas Day. photo courtesy of Natalie Logan

According to 16-year-old Natalie Logan, Sammy was accidentally let out of the house while the family was cleaning up after opening presents on Christmas morning. The parrot had hitched a ride on her father’s shoulder when he went outside to throw away some wrappings and boxes. The bird then took flight.

“He flies around the house a lot, but had never been outside before,” Logan said.

The parrot was last spotted flying near the LDS chapel on Cedarview Street, evidently heading south. Pied cockatiels are native to Australia, according to Logan, and don’t do well in temperatures below 60 degrees. Because it’s unlikely that the bird could have gotten far before nightfall — at 4 years, Sammy is relatively young for a species that can live to be 30 — the family is hoping Sammy has found refuge someplace warm.

Logan, a long-time bird lover, received Sammy, along with an older cockatiel named Sonia, for her 16th birthday this year.

The pair was adopted from a family in Provo that was relocating and unable to take the birds with them. Though Sammy was shy at first, Logan said she had bonded with her new pets over time. Sammy in particular like to sit on her shoulder, and would call to her in the morning He had learned to whistle from his previous owners, and would also laugh or cry, imitating what he heard on T.V.

“He’s smarter than a cat or a dog, so I felt that I had a stronger bond with him,” Logan said.

The Logan family is offering a $50 reward to anyone who might locate and return their pet. Sammy is white and grey, with a yellow crest and orange spots on his cheek. He doesn’t respond to his name, but likes people with dark-colored hair and may respond to whistling, especially to the tune of the Andy Griffith song or of “Pop goes the weasel.” He’s also especially fond of sour cream and onion flavored potato chips.

“He’s not supposed to have them, but he’ll go crazy if he sees them,” Logan said, adding that he might try to steal a few if he sees someone with them. Anyone who believes they have seen the bird is encouraged to contact Natalie Logan at (435)850-2458.