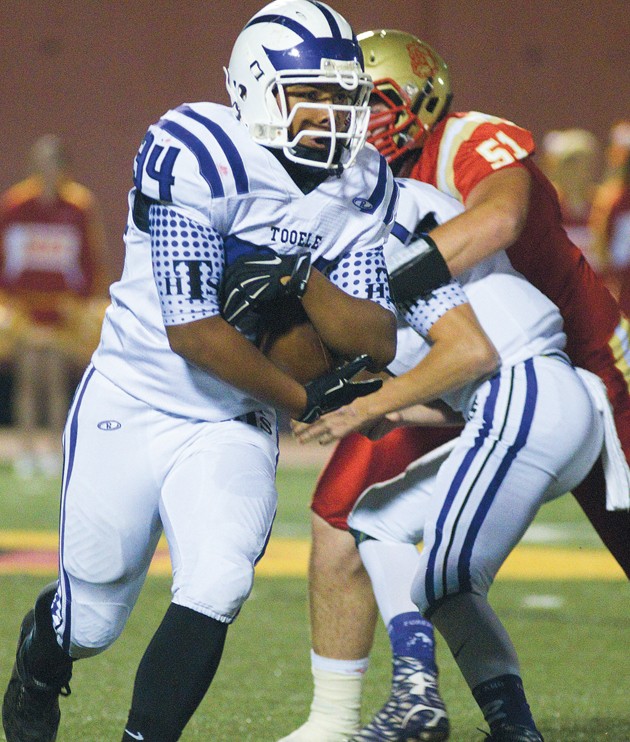 Tooele’s Jeno Bins earns a first down with a 9-yard carry in the regular season win over Judge Memorial High School on the road.

October 29, 2015
Tooele football ain’t broke, so there’s no point trying to fix it

That seems to be the mentality for the Tooele football team this season, as the Buffaloes have stuck to what works best for them en route to a 7-3 record and a second-place finish in Class 3AA North.

Their ground-and-pound, three-yards-and-a-cloud-of-dust offense might not be the flashiest or most glamorous. They may have completed fewer passes this season than some other teams do in a single game.

They may even cause their own fans to implore them to “open up the playbook,” as one fan did from the top of the stands on the opposite side of the field at Judge Memorial last week (yes, we heard you).

But, you know what? There’s no point in changing things if what you’re doing is working.

Sure, the Buffs and coach Kyle Brady aren’t averse to adding a little bit of surprise to their offense. Fake punts and halfback passes are proof of that. But their Wing-T, run-heavy attack is their bread and butter.

Tooele rushed for nearly 400 yards last Friday against Judge Memorial. They ran for a season-high 467 yards in a 70-49 slugfest against Ben Lomond, and opened the season with a 421-yard effort against Grantsville. They’ve rushed for 33 touchdowns, scored by six different players.

The Buffs average better than 280 yards per game, and have been held under 200 yards just three times  — twice by larger opponents Murray and Maple Mountain, and once by out-of-state foe Shelley (Idaho).

That rushing attack also has paid major dividends in terms of time of possession. When you’re facing high-powered offenses like Logan and Park City, ball control is key. Tooele stymied a comeback attempt by rival Stansbury with a drive that lasted more than eight-and-a-half minutes to preserve a 27-16 win. A similar drive kept Park City’s pass-happy offense off the field for extended periods of time in a 35-14 win that enabled the Buffs to clinch a first-round bye in the state playoffs.

And, of course, it’s hard not to keep handing the ball off when it results in nearly six yards per attempt.

The Buffs’ willingness to spread those carries around is particularly impressive. Lincoln Powers leads the team with 788 yards and 10 touchdowns. Pete Smith has 747 yards and five touchdowns, and Ryan Brady had 666 yards and seven touchdowns. Quarterback Carver Jaramillo has been a valuable option in short-yardage situations with eight TDs, and sophomore Jeno Bins has become a major big-play threat, rushing for 123 yards on just 11 carries in three games. Nate Reynolds has rushed for 133 yards.

So, to those of you who believe Tooele’s offense seems repetitive, I respond with this: well, it works, doesn’t it?

The best defense is a good offense, and an offense that controls the ball as well as Tooele does makes things a lot easier on the defense.

Darren Vaughan is a veteran sports writer from Moab, Utah. He knows that “three-yards-and-a-cloud-of-dust” doesn’t apply on artificial turf. Email him at dvaughan@tooeletranscript.com.