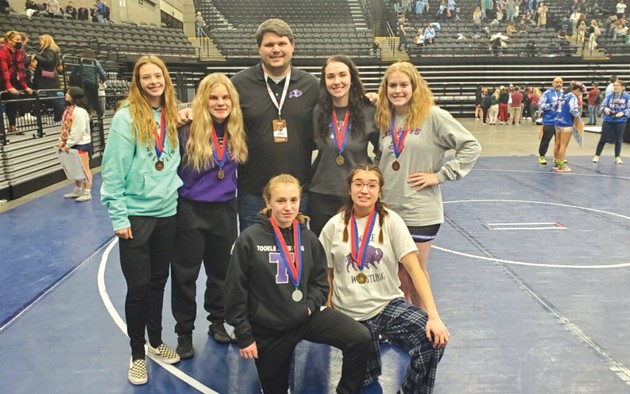 “In the pre-season 5A state rankings, we are ranked sixth behind Stansbury,” Spendlove said.  “We lost a lot of seniors last year and only have three seniors and a junior this year.

“We are young, but we are looking forward to seeing where it will all come out in February.”

Spendlove, along with assistant coaches Aaron Garcia and Nathan Webb, asks his wrestlers to “come in and be 1% better every day!”

Although the Buffs aren’t loaded with upperclassmen, they do have several wrestlers returning with experience.  “It’s been great in practice to be able to have the girls teaching and showing each other moves and technique,” Spendlove said. “It’s been our best first week of practice in three years because of the experience the girls have.

“They now run practice and set the tone of who we want to be as THS wrestlers.”

The Buffs’ three seniors this year are Kaleolane Ned, Ali Baird and Jayce Ware. Ware placed fifth last year, while Ned and Baird almost medaled, falling in the blood round.

During the off-season, several of the THS wrestlers spent time in the room improving their skills, and several competed in the Freakshow, a large national tournament that is held in Las Vegas each October.

“They went to Vegas in the off-season,” Spendlove said. “It was great for them to have that experience and to see some of the best wrestlers nationally.”

Spendlove feels that his team will compete well in their region this year.

“Uintah placed second in the state last year; Stansbury is always solid; Cedar Valley will be tough and Hillcrest doesn’t have a lot of wrestlers, but those who they have are quality,” he said.  “It will be a dogfight in the Region for first through fifth places, but I feel that we will be in the mix.”

Tooele opens their season with a home tri-dal against Hillcrest and Unintah Thursday, December 1. They will travel to the Skyhawk tournament the next day to go up against top competition in the state.

“Overall, I’m just eager to see where it all comes out,” Spendlove said. “We’re young and we have so much potential. We may not finish in the top five, but I’m excited for the future of where we’re going to be.”