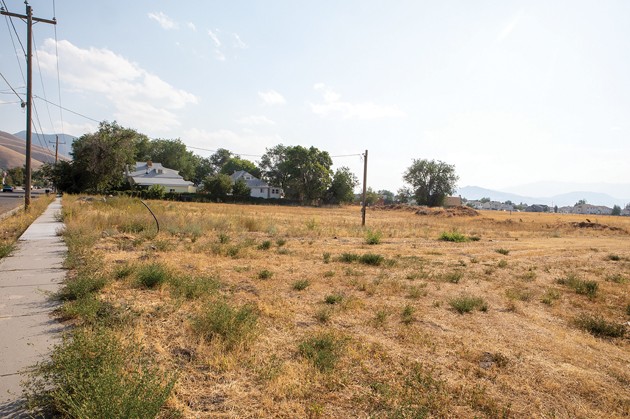 A development is being considered by Tooele City for this property at 596 Coleman Street.

The final plat subdivision for a development near the intersection of 700 South and Coleman Street was approved by the Tooele City Council at its meeting last Wednesday.

On a 14-acre parcel at approximately 760 W. 700 South, the subdivision will include 53 single-family residential lots. The lots meet or exceed the minimum size requirements for the R1-7 zone, which is 7,000 square feet, and it is surrounded to the north and east by the same zoning designation.

The parcel, located south of Van Dyke and American ways, was the origin site of a grass fire in 2016 that destroyed 11 homes and damaged 17 more.

Included in the subdivision final plat is a stormwater detention basin, which the developer, Blue Bison Development, proposes to dedicate to Tooele City for ownership and maintenance, the report said.

There is a strip of land to the north of the subdivision owned by Settlement Canyon Irrigation Company that is used as a drainage ditch, according to Jim Bolser, the city’s community development director. The property owner has worked out an arrangement with the irrigation company to discharge stormwater from the development from its retention pond into the ditch in exchange for piping the channel, Bolser said.

The City’s planning commission forwarded a unanimous positive recommendation for the subdivision final plat during its Aug. 14 meeting. The City Council followed suit, with unanimous approval on a motion from Councilman Scott Wardle, seconded by Councilman Brad Pratt.

The condominium plat request for an adjacent property touching South Coleman Street, a parcel of only .99 acres, was also approved at the meeting. The developer, Lazarus Investments, LLC, intends to build six condominium units on the existing three-lot subdivision.

On each of the three existing lots in the parcel, there would be one duplex, with each unit containing 1,315 square feet of living space with a 1,400-square-foot basement and a two-car garage, according to the staff report. The plat received a unanimous positive recommendation from the City’s planning commission.

The condominium plat request was also unanimously approved by the City Council on Wednesday, on a motion from Pratt and a second from Councilwoman Melodi Gochis.