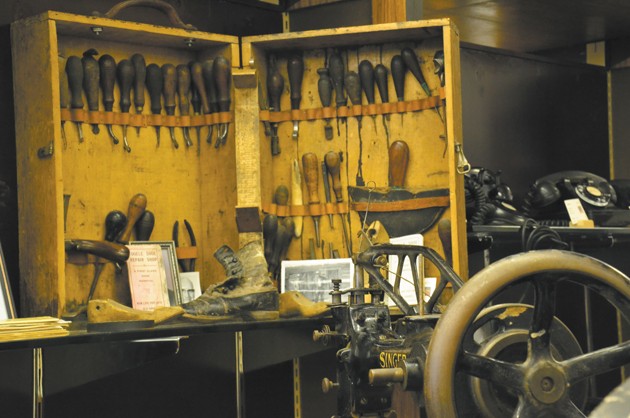 Many shoe and boot-making tools, as well as other artifacts, are on display at the Tooele Pioneer Museum.

Mom and Dad bought a brand spanking new home when I was 4 or 5-years-old. As a child I’m sure I didn’t appreciate what a huge decision and commitment that was, but I did very much understand what a treasure it was to have a weed-covered field behind our lot. One of the first things Dad did was to build a sand-pile for us to dig in the far corner of the backyard. But the real diggers paradise was that untouched expanse just waiting for kids to turn the whole field into a big playground. And we did. We even rode our “Western Auto” bikes on hidden trails we had made from underground hut to underground hut. The riding only happened once because Dad got real tired of patching the inner tubes that just seemed to attract every “Buffalo Head Thorn” in the world. Others called those thorns “Goat Heads.” The actual name is “Tribulus Terrestris.” Huh?

Those troublesome Buffalo or Goat Head thorns seemed to be attracted to anything rubber. When our “Keds” sneakers got a little too thin, they too would be punctured. A new band-aid and a “kiss it better” worked wonders. But Mom always went one step beyond. Since new “Keds” back then cost a whopping $2.49, it was much cheaper to just scissor some card board inner soles, and “Whala” we were back in business. We all realized that new “Keds” wouldn’t happen until school started again in the fall. Then we really would run faster and jump higher, just like the “Keds Rubber Man” on TV said we would.

It’s amazing what mass production will do. Back when Tooele was established, a fancy new pair of cowboy boots could bring as much as $50. That was a full months wage back then. When his enlistment in General Patrick Conner’s army was finished, Fredrick Hiss, a former military boot maker, set up the first shoe and boot shop in Stockton,Utah. It is unknown whether he could garner $50 for a pair of boots in Stockton as he could to the soldiers back in Fort Douglas.

The first noted shoe maker in Tooele was John England. He brought his shoe making skills from England, and upon arriving in Salt Lake City, was advised to move to “Tuilla” where Thomas Lee had a leather tannery going. John “had bought a pair of crimping boards and boot trees. These were the only crimping boards and boot trees in Tooele County. With them, John made the first pair of boots in Tooele County, which he presented to Parley P. Pratt as a present when he left for his mission to Palestine.”(HTC pg. 48)

John England and others built and started Tooele Co-op which naturally had a shoe department. John managed the shoe department until leaving for a mission to Great Britain. In his absence, Jonas E. Lindberg took over. After returning from his mission, John built a new shoe shop on Vine Street, that was reported to employ as many as 10 shoemakers. At near the same time, Jonas Lindberg and James Howell also built new shoe shops, one on North Main and the other on South Main. Totally hand crafted shoes and boots sold for as little as $2.50 to as much as $27.00. There was apparently enough business to engage three separate shoe shops and the Tooele Co-op. My how times have changed. Other shoe makers and repairers included John A. Lindberg, John Mills, Lewis G. Bowen, Benjamin H. Bowen, Joe White, Paul Meng, George Karavitas, Elmer Cole and the Leonetti Brothers.

In my short life, I remember Benjamin H. Bowen, Elmer Cole and George Karavitas. I especially recall the rich fragrance of leather, glue and polish that emanated from George Karavitas’ shoe repair shop on East Vine. I paid $9 for new soles and heels on an expensive pair of shoes I wore everyday at work. These were as comfortable and wore as well as the shoes were when purchased new for over $100. When I paid George for his work, I recollect him, in his rich Greek accent saying, “This part for the governor, and this part for me,” as he divided my payment into two separate boxes. How fortunate I am to have lived during such magic times.

To view such times for yourself, come to the Tooele Pioneer Museum at 47 East Vine on Fridays and Saturdays from 10am to 4pm. There you will find a display of shoe making and repair tools such as lasts of hardwood and cast iron, shoe trees, crimping tools, hammers, leather trimmers, hand stitchers and more. There is even a huge hand turned “Singer Leather Sewing Machine.” Of course, entrance is always free. For appointments at other times call Tim Booth at 435-882-1902.

The author wishes to credit the Daughters of Utah Pioneers book, “The History of Utah’s Tooele County” for much of the information contained in this column. This treasure trove of nearly 500 pages and more than 500 photos as well as biographies and history is now being sold at the Tooele Transcript Bulletin at 58 N. Main in Tooele.