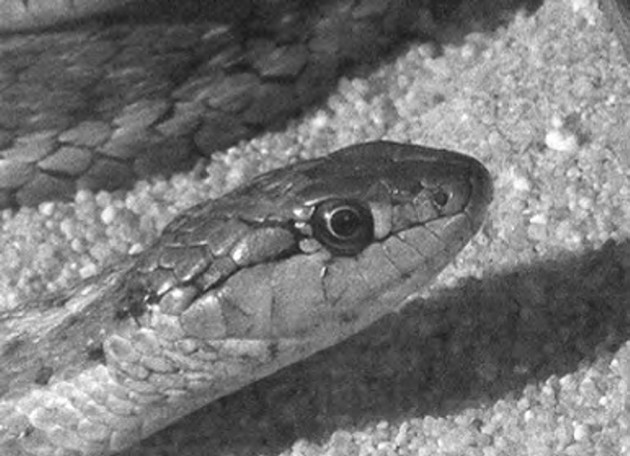 This garter snake was found sunning itself on Blue Peak Road’s warm dirt. Garter snakes are not poisonous, but are commonly found in Utah.

March 7, 2013
Tooele has snakes, but most are not poisonous

Utah’s most common non-venomous snakes include species of garter snakes, such as the rubber boa and the gopher or bull snake. Although Utah has no true water snakes, the garter snake is often referred to as a water snake since it is frequently found near water.

Pit vipers are venomous and have a heat-sensitive, pit organ located between their nostrils and eyes. This heat sensing system helps these snakes “see” the heat radiating from its prey in the dark, which allows an accurate strike. Non-venomous snakes, like the garter snake pictured, does not have a pit organ. It is harmless to humans and pets and is beneficial to gardens by controlling local insects and rodent populations.

Keep in mind that even though garter snakes are harmless and can be kept as pets, they are still protected under the state of Utah and classified as non-game animals. Before capturing a live wild snake, you must first receive a certificate of registration from the Utah Division of Wildlife Resources.